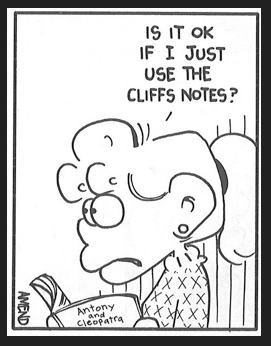 Amend, Bill. The Return of the Lone Iguana: A FoxTrot Collection by Bill Amend. Kansas City: Andrews and McMell, 1996.
Somehow, writing a paper is more intimidating that performing a play.

At least, it seems that way when we consider Paige's emotions in FoxTrot's Anthony and Cleopatra Series.

In that series, which appears on page 74 to 79 of the book cited above, Paige auditions for the play.

To her dismay, she gets a role.

The role is the female lead.

The series is considerably longer than the one on Macbeth—it's twice as along and has a Sunday feature to go along with it, in fact!

Here are the first six strips. By the way, these are reprinted to accompany this review of the book. By the other way, the reivew of the book is that it is stunning. Scroll down to buy yourself a copy. And then buy one for every Shakespeare lover that you know!