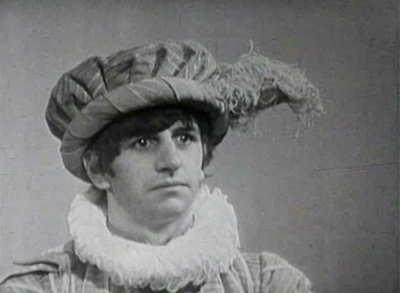 The Beatles: Around the World. [a.k.a. Around the Beatles]. Perf. John Lennon, Paul McCartney, George Harrison, Ringo Starr, and Trevor Peacock. 1964. DVD. Video Music, 2003.
A long time ago, I tracked down this rare clip of the Beatles performing Shakespeare, started considering all the clever ways Beatles songs could be worked into productions of Shakespeare, and promptly forgot about the clip itself.

But it's back. The Fab Four here portray the rude mechanicals from A Midsummer Night's Dream as they put on their version of Pyramus and Thisbe:

This clip mainly has the effect of filling its viewer with wonder and awe that anyone was ever able to hear the Beatles well enough to judge their musical quality—early fans of the Beatles were apparently seldom if ever able to hear the Beatles perform (at least at any live venue) over the screams of the fans next to them. But even if it's hard to hear, it's fascinating to see John, Paul, George, and Ringo (and Trevor Peacock, for good measure) in these roles. The audience seems to eat it up. But they'd probably be screaming with joy if they were performing Moose Murders or gargling with low-quality ginger ale.
Links: The Film at IMDB.

Wow, thanks! however you got that into your hands, thank you :)!! it was fun to watch!

Did you ever write up your ideas for using Beatles songs in Midsummer? I'm working on such a project right now and would love a starting point...

I think we had a Twitter hashtag game going for a while. But I didn't write up anything official.

I did use a recording of "Dream a Little Dream of Me" for the curtain calls in a production of MND I directed . . .

What's your project about? Give us a few ideas, and perhaps we can come up with a few suggestions!