The Renaissance Feud in The Facts of Life 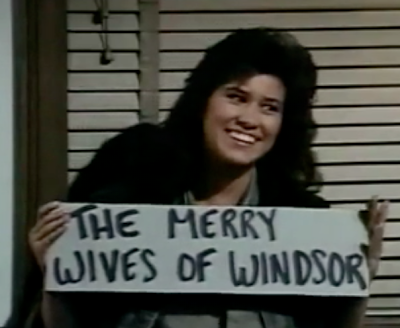 "E.G.O.C. (Edna Garrett on Campus)." By Janis Hirsch. Perf. Charlotte Rae, Lisa Whelchel, Kim Fields, Mindy Cohn, Nancy McKeon, and Clive Revill. Dir. John Bowab. The Facts of Life. Season 6, episode 8. NBC. 14 November 1984.
I'm trying to be much better about passing along the bits and bobs (and books and blocks) of Shakespeare that I find as I encounter them instead of several months or years after. That will mean that some posts will be much more informative than analytical, but I hope none of you will be offended by that. After all, this is a MicroBlog!

Today, I'm pointing you toward an episode of The Facts of Life I learned about from Shakespeare Geek's Twitter Feed. The housemother of a woman's boarding school returns to college to pursue an English major.  She ends up in a Shakespeare class, and the professor decides to play a game he calls "The Renaissance Feud."


The premise is all right, but I'm not convinced that its working out is the best it could be. Still—there it is!
Links: The Episode at IMDB.