Shakespeare in The Twilight Zone: “Fear” 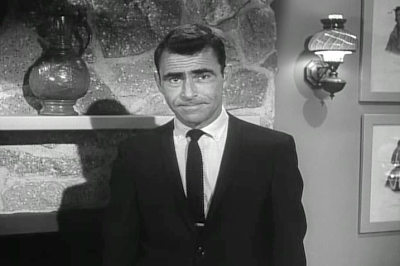 “Fear.” By Rod Serling. Perf. Peter Mark Richman and Hazel Court. Dir. Ted Post. The Twilight Zone. Season 5, episode 35. CBS. 29 May 1964. DVD. Image Entertainment, 2005.
The Shakespeare in this episode is bound to be a bit anti-climactic, especially after "The Bard." And it also is the second time the show has turned to this quote. The clip pretty much speaks for itself, needing no further plot summary. And the quote—well, the quote speaks directly to the philosophy of The Twilight Zone: "There are more things in heaven and earth, Horatio, than are dreamt of in your philosophy."

Click below to purchase the complete season from amazon.com
(and to support Bardfilm as you do so).