Shakespeare in The Twilight Zone: “The Last Flight” 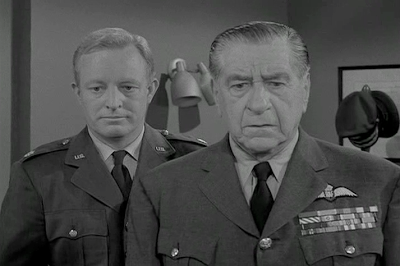 “The Last Flight.” By Richard Matheson. Perf. Kenneth Haigh, Simon Scott, Alexander Scourby, and Robert Warwick. Dir. William Claxton. The Twilight Zone. Season 1, episode 18. CBS. 5 February 1960. DVD. Image Entertainment, 2004.
The Shakespeare in this episode is carefully and thoughtfully integrated into the show's ending. The plot involves a pilot from World War I fleeing from a battle, leaving one of his comrades alone and in danger, by flying into a mysterious cloud. He lands in the 1950s, recognizes his cowardice, and flies back into a similar mysterious cloud to finish the battle.

In the clip below, the officers from the 1950s meet up with the pilot's comrade—who bore the nickname "Old Leadbottom" (but only among the few members of his squadron)—and say, in a very Shakespearean way, that they will recount to him the details of what's happened off stage.

At that point, the camera turns to the window to show us a mysterious cloud. The voice of Rod Serling closes the episode with the quotation that follows the clip—a quote that is very apropos of The Twilight Zone in general.