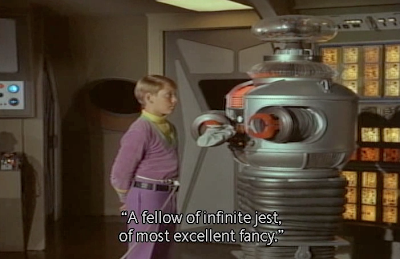 "The Space Creature." By Irwin Allen and William Welch. Perf. Guy Williams, June Lockhart, and Mark Goddard. Dir. Sobey Martin. Lost in Space. Season 3, episode 10. CBS. 15 November 1967. DVD. Twentieth-Century Fox, 2008.
This was the first—and it may be the last—episode of Lost in Space that I've ever watched. My attention was called to it by the same reader who had found allusions to Shakespeare in Buffy, the Vampire Slayer.

In this episode, upon the disappearance of Dr. Smith, Robot (who has his own Shakespearean connection, being designed by the designer of Robbie, the Robot, of the Tempest-related Forbidden Planet) holds the ice bag Dr. Smith had on his head earlier and gives us part of Hamlet's Yorick speech:


I don't have much to say beyond that—except to note that this is one more instance of the pervasiveness of Shakespeare in modern Western culture.
Links: The Episode at IMDB.

Wow. I have just watched a replay of the original Lost in Space series and was amazed to hear another quote from Shakespeare, courtesy of the robot "There's a special providence in the fall of a sparrow."
Wow.
Seems like there's more than I remember to this kids' show...

Thanks for the tip, DangerDanger!

Actually, it seems like it's Season 1, episode 3 ("Island in the Sky"). Still working to track it down!