Shakespeare in The Twilight Zone: “The Incredible World of Horace Ford” 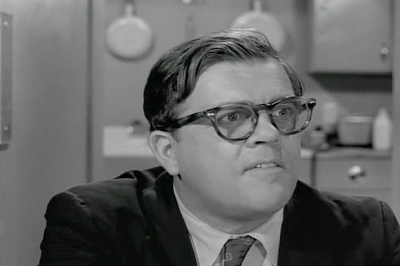 Horace, the protagonist of this episode, is turning forty, and he is reflecting back with considerable nostalgia on his childhood in the 1930s on Randolph Street in New York City. He recalls all the kids he used to play with and all the games they used to play. And then he finds himself going back in time to Randolph Street, where he sees his former playmates, who are still around ten years old. Two points of interest arise out of this.

The first is one of the games the kids are playing. In the sequences set in the 1930s, we hear one of the children call "Ringolevio, caw, caw, caw!" I knew nothing about the game before watching this episode, but it is a well-documented game played (under that name) specifically in New York City. It sounds similar to the game called "Capture the Flag" that I played growing up. You can read a lengthy entry about it on Wikipedia. Or you can read a book titled Ringolevio: A Life Played for Keeps.

The second is a set of words associated with a set of actions that Horace says one kid of his acquaintance was known for. The kid would make a fist, say, "Shake" while shaking it, "Spear" while poking another kid in the side with it, and "Sock an ear" while bumping the kid on the ear. Together, it comes out quickly as "Shakespeare—sock an ear!" Horace demonstrates the actions in the clip below (and there's a bit more afterwards that has the cry of "Ringolevio"):

I had also never heard of "Shakespeare—sock an ear." And that's true even after a childhood filled with the songs of Allan Sherman. His "Turn Back the Clock" features tons of rhymes and sayings that kids of Sherman's generation used to say. And now I want to know how widespread or well-known "Shakespeare—sock an ear" was. I currently have a call into the amazing and knowledgeable people of the public radio show A Way With Words, and I hope they'll have some news for me.

In the meantime, enjoy this clip—and please comment below if you know anything about "Shakespeare—sock an ear."
Links: The Episode at Wikipedia.

Bonus Material: The Lyrics to Allan Sherman's "Turn Back the Clock":

Teacher, teacher, I declare,
I see your purple underwear.

Margarite, go wash your feet,
The board of health's across the street.

Ladies and gentlemen, take my advice,
Pull down your pants and slide on the ice.

Inka binka, bottle of ink,
The cork fell out and you stink.

Mary had a little lamb,
The doctor was surprised!

Roses are red, violets are blue,
I copied your paper and I flunked too.

Roses are red, violets are blue,
Whenever it rains, I think of you—drip, drip, drip!

Your mother is a burglar,
Your father is a spy,
And you're the dirty little rat
Who told the F.B.I.

Oh what a face, oh what a figure,
Two more legs and you'd look like Trigger!