Shakespeare in The Twilight Zone: “The Purple Testament” 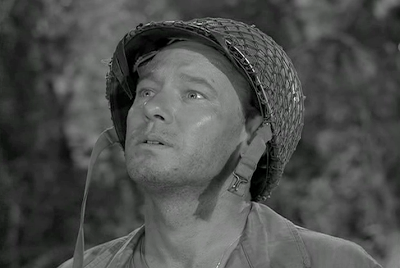 “The Purple Testament.” By Rod Serling. Perf. William Reynolds, Dick York, Barney Phillips, and Warren Oates. Dir. Richard L. Bare. The Twilight Zone. Season 1, episode 19. CBS. 12 February 1960. DVD. Image Entertainment, 2004.
In this episode, a soldier has the ability to see who is going to die that day.  The gift terrifies him, and he starts to exhibit signs of a nervous breakdown.

At the end of the episode (which you should see for yourself—I'll try to avoid spoilers), Rod Serling's voice comes in and gives a quote from Richard II (which he mistakenly attributes to Richard III):  “. . . he is come to open / The purple testament of bleeding war” (Richard II, III.iii.93-94).