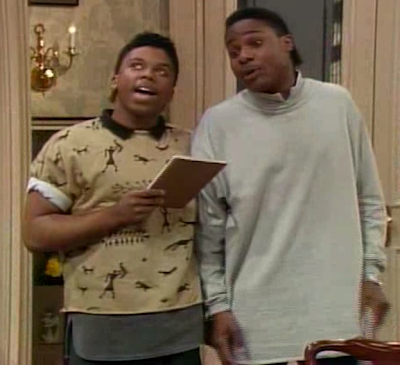 “Shakespeare.” By Matt Robinson. Perf. Bill Cosby, Phylicia Rashad, Malcolm-Jamal Warner, Roscoe Lee Brown, Christopher Plummer, and Carl Anthony Payne, II. Dir. Jay Sandrich. The Cosby Show. Season 4, episode 5. NBC. 22 October 1987. DVD. Urban Works, 2007.
The Cosby Show moved from Macbeth in its second season to Julius Caesar in its fourth. After spending some time complaining about how boring Shakespeare is, the two young scholars (Theo and Cockroach) begin to realize that it makes sense after all. As a culmination of this epiphany, they perform a rap version of Mark Anthony's "Friends, Romans, Countrymen" speech.

It's not difficult to find rap versions of Shakespeare plays—and not many of those rise to the top. This one seems fairly straightforward—pretty route—at first.  But listen to the lyrics (and read them—they're printed below). There are some genuinely interesting and inventive devices here.

For example, Anthony's "And Brutus is an honourable man" is transmuted into "Brutus is cool." In itself, that's nothing. But it's placed in a half line with no rhyming line to accompany it, and the effect is (as it is in Shakespeare) to call our attention to the line and to invite us to question its truthfulness.

Additionaly, there's a majesty and magic in the rhythm, cadence, and alliteration of "Caesar was about to run Rome to ruin" and "Caesar said, 'No, baby,' and turned the crown down." Marvelous, that. Really.

Theo:
Now, I’m Marcus Antonius, but they call me Mark
I didn’t come to bite, you see, I came to bark.
About the holes that the brothers put in Julius C—
As far as I’m concerned, it was cool with me.
You see, Brutus and the boys must have know what they were doin’;
Caesar was about to run Rome to ruin.
’Cause Brutus is cool . . . [Breakdown.]

Cockroach:
All Caesar did was to Romanize the world
And put some bronze in the palm of every boy and girl
But the man’s so chill that when they handed him the crown,
Caesar said . . .

Cockroach:
. . . and turned the crown down.
But Brutus, he said, he said he’s into greed,
Which is how he justified the Ides of March deed.
But Brutus is cool . . . [Breakdown.]

Cockroach:
So let’s get busy ’til he comes this way.

Theo:
Doctor was taken to the bridge!

Cockroach:
Was to drop some old gold on each one of you

Theo:
J.C. was your father.

Cockroach:
J.C. was your brother.

Cockroach:
When comes such another?

Theo:
From coast to coast!


Links: The Show at IMDB. Brief Previous Post on the Subject.


Click below to purchase
every conceivable season of The Cosby Show
from amazon.com
(and to support Bardfilm as you do so).

This gives me an idea for a whole new blog: Bardrap. The clip, following the Macbeth episode, is priceless. Thanks!

Who actually wrote the rap ? Did they have Heavy D or big daddy kane on set ?

Thanks for the question, Unknown!

I went back to the credits for the show to see if there was any particular credit for the rap itself. All I'm getting is "Musical Direction by Stu Gardner and Arthur Lisi." But looking at the other episode I have (the one with that has to do with Macbeth), I get the same credit. In essence, then . . . I don't know!

Anyone else able to help?