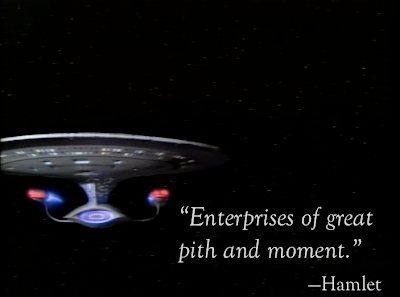 “Title Sequence.” Star Trek. Seasons 1-3 (Original Series); Seasons 1-7 ( The Next Generation). DVD. Paramount, 2002.
From its beginning—from the first word of its title sequence, in fact—Star Trek has been deeply indebted to Shakespeare. In this clip and in the text below it, I reveal the allusions to Shakespeare made in the opening title sequence. For the first time, you may trace the origins of the word "space" and the name of the multiple Enterprises that fill the screens of Star Trek lore:

“I could be bounded in a nut shell and count myself a king of infinite space[: The final frontier].”

“Goes it against the main of Poland, sir, or for some [final] frontier?”

“With her I lived in joy; our wealth increased / By prosperous voyages [of the starship Enterprise].”

“[These are the voyages of the starship] Enterprises of great pith and moment.”

“Whose glorious deeds, but in these fields of late, / Made emulous [five-year] missions ’mongst the gods themselves.”

“I thank your majesty, and her, my lord: / These words, these looks, infuse new life [and new civilizations] in me.”

“Sound drums and trumpets [to] boldly and cheerfully [go where no one has gone before]; / God and Saint George!”