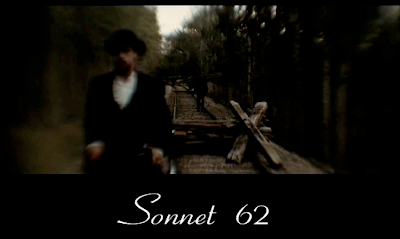 The Assassination of Jesse James by the Coward Robert Ford. Dir. Andrew Dominik. Perf. Sam Shepard, Mary-Louise Parker, Casey Affleck, and Brad Pitt. 2007. DVD. Warner Home Video, 2008.
Some time ago, I heard a rumor that there was some Shakespeare-related matter in the latest Jesse James flick. It turns out to be true! I prepared a short clip of the scene in question (the sound was terrible, so I put the text over the images). As they're waiting to rob the train, one of the bandits quotes the first four lines of Sonnet 62 (you can just barely hear it, I'm afraid) in a delightful backwoods Missouri accent:


Sin of self-love possesseth all mine eye
And all my soul and all my every part;
And for this sin there is no remedy,
It is so grounded inward in my heart.

Apparently Frank James (played by Sam Shepard, who was reciting the sonnet) did have a fondness for Shakespeare in real life and considered being a teacher.