It was a television show. Take it for all in all, we shall not look upon its like again. 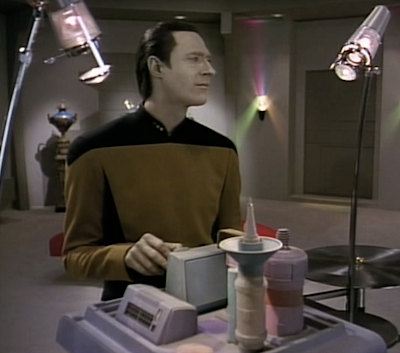 “The Most Toys.” By Shari Goodhartz. Perf. Patrick Stewart, Jonathan Frakes, LeVar Burton, Michael Dorn, Gates McFadden, and Brent Spiner. Dir. Tim Bond. Star Trek: The Next Generation. Season 3, episode 22. Syndicated television. 5 May 1990. DVD. Paramount, 2002.
We return to Shakespeare and Star Trek with a moment that most of the commentators have missed.

In this episode, Data is stolen away by an enormously devoted Trekkie, but the other members of the crew think he has blown up. Captain Picard, glancing at a copy of Shakespeare he had previously given Data, finds a bookmark on the page where Horatio questions Hamlet about Hamlet's father. It becomes a statement on the humanity of Data: