There Will Be a Shakespearean Title 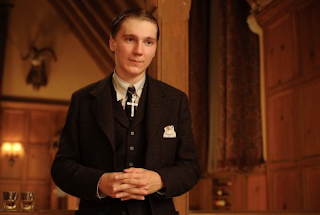 There Will Be Blood. Dir. Paul Thomas Anderson. Perf. Daniel Day-Lewis, Paul F. Tompkins, Paul Dano, and Randall Carver. 2007. DVD. Paramount, 2008.
Since it's proving desperately difficult to upload a video at present (after four hours, the two-minute clip I planned still hadn't uploaded), you'll have to be satisfied by these comments on a film that I have not seen.

However, it does have a Shakespeare allusion (though not a direct quotation, so it's not exactly titularly parasitic) in its title. There Will Be Blood seems to allude to this speech of Macbeth's from III.iv:

Although I haven't seen the film, the themes do seem to be Shakespearean—Macbethean, to be more precise. Those who have seen it, let me know if the allusions run deeper than that!

And everyone can wait until after Christmas for the intended video clips. I'll store them up for later distribution!
Links: The Film at IMDB.

I would definitely call it Shakespearean in spirit. While there's no Lady MacBeth and seemingly no guilt to rub out on the part of the protagonist, one could argue that he's a tragic hero, causing his own ruin as a human being, while achieving unparalleled success financially. It's worth a watch, definitely. One of the best films of recent years.

Thanks for that response! It's got me wondering . . . would No Country for Old Men be considered an adaptation of King Lear?