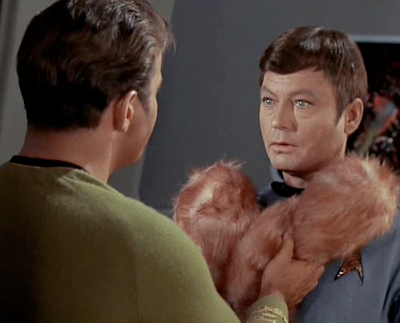 
All right, so it didn't happen exactly that way. I've taken the audio from Shatner's 1968 album that combined the classics of literature with modern song lyrics—all in the inimitable style of William Shatner—and grafted it to the "Trouble with Tribbles" episode.  It actually works, in a weird, wild, wonderful way.
Links: A Gateway to Star Trek Information at Wikipedia.
Copyright 2008-2039 by kj at 9:25 AM

I love this Shatner/Shakespeare link...he's very projectable character, if you know what I mean. I can even see him doing Eleanor of Aquitaine in this quote from her famous speech from Lion in Winter.

WE are the killers. We...BREED... wars. We CARRY it...like... SYPHILIS inside. Dead bodies rot in field and stream...because... the LIVING ones are rotten. For the LOVE of GOD, can't we love one another just a little - that's how peace begins...

Didn't he say just that in "The Gamesters of Triskelion"?