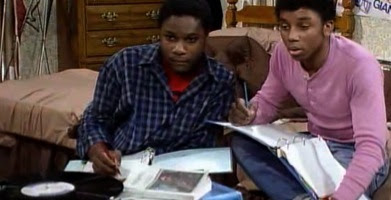 “Theo and Cockroach.” By Thad Mumford. Perf. Bill Cosby, Phylicia Rashad, Malcolm-Jamal Warner, and Carl Anthony Payne, II. Dir. Jay Sandrich. The Cosby Show. Season 2, episode 15. NBC. 30 January 1986. DVD. Urban Works, 2007.
The Cosby Show, a smart and funny (and sometimes sophisticated) family comedy, integrates Shakespeare into its plots twice.  In the second season, Theo and Cockroach try to listen to an LP of Macbeth instead of reading the play.  In the fourth season, they perform a rap version of Mark Anthony's "Friends, Romans, Countrymen" speech—more on that anon.

The clip below shows the expressions on their faces as they try to make sense out of the lines as they hear them.  I've see that expression!  I've worn that expression, come to think of it!  But hearing the plays aloud can be enormously helpful to understanding them.


Links: The Show at IMDB.  Brief Previous Post on the Subject.


Click below to purchase
every available season of The Cosby Show
from amazon.com
(and to support Bardfilm as you do so).