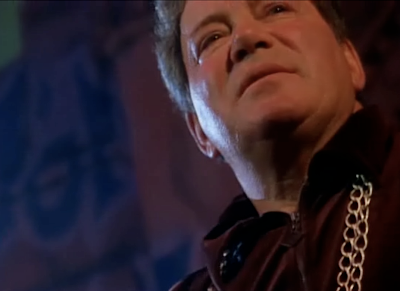 For your convenience in doing a comparative analysis, I'm also providing in this post the version presented by The Cosby Show, which I've written about here. Please vote for the one you like best in the comments below!


P.S. The original title of this post was "Rapmaster J.C." But I realized that "Rapmaster M.A." would be more appropriate. But that didn't sound right. So I tried "M.A., M.C." or "M.C. M.A." They were too obscure or sounded like I was granting degrees to Mark Anthony. I finally decided on "Notorious W.S." as an interesting title with a rap allusion and ambiguity as to the antecedent of W.S.—Shakespeare scholars are sure to drool over that. Perhaps "A Funeral Elegy by W.S." should be attributed to the Shatner W.S. and not to the Shakespeare W.S.
Links: The Show at IMDB. The film at IMDB.

Click below to purchase the film or
every single season of The Cosby Show
from amazon.com
(and to support Bardfilm as you do so).

Theo and Cockroach get my vote. The point of their creative adaptation is to show they grasp the meaning of Mark Anthony's speech, which they do rendering it in the native idiom of rap) or at least a G-rated facsimile thereof).

(Here I am, arguing for the greater authenticity of William Shatner's rap stylings.)

Thanks, E.M.P. for the good points.

Since Antony's speech is directly inspired by his observation that "passion, I see, is catching," a rap version would be ideal to fire up an audience. But like KJ, I give the nod to Shatner as well, though, for working with so much of the original text.