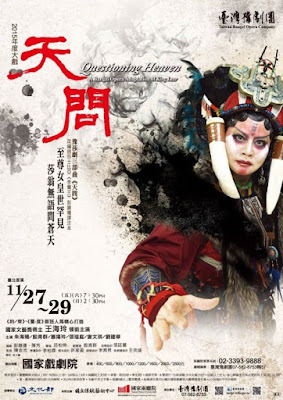 Questioning Heaven. Dir. Po-Shen Lu. Perf. Hailing Wang and the Taiwan Bangzi Company. 2015. 7 April 2017. Shakespeare Association of America Convention.
In 2011, the Shakespeare Association of America brought the Taiwan Bangzi Company to Bellevue to perform Bond, a Bangzi Opera version of Merchant of Venice (for which, q.v.). I was able to purchase a DVD of that performance (for which, q.v.).

This year, the SAA provided a screening of Questioning Heaven: A Bangzi Opera Version of King Lear by the same company. A commercially-available DVD—or, indeed, any YouTube clips of the performance—has proven elusive enough that it could currently be counted among the Shakespeare and Film Holy Grails. And that's a shame because the performance was both stunning and fascinating.

Questioning Heaven gives us a Queen Lear. She enters with pomp and music, singing about how she has ruled the land on her own for eighteen years.  “Unceasing wars have aged me, worn me down,” she sings.  Later, she adds, “And now, at last, the land is unified.” Everyone seems satisfied to join in these self-congratulatory speeches.

But when she sings the line “Xuanyuan Empire will cut in three,” everyone looks worried. It's an especially insightful moment—the singing to that point has celebrated unification; how can the Queen not see that she now intends disunity and division?

The plot runs along the lines of Shakespeare's play.  We learn that Wei, the third daughter, was born after her father died. Much dance and celebration with the “hundred knights” fill the opening scenes. The fool (who is quite brilliant) jokes about how the Queen should “Give me some land, too.” And we eventually get Edgar in disguise as a mendicant monk.

I wish I could provide a representative clip. Instead, I can only point you toward some photos of the set design; they provide a sense of the grandeur of the production. 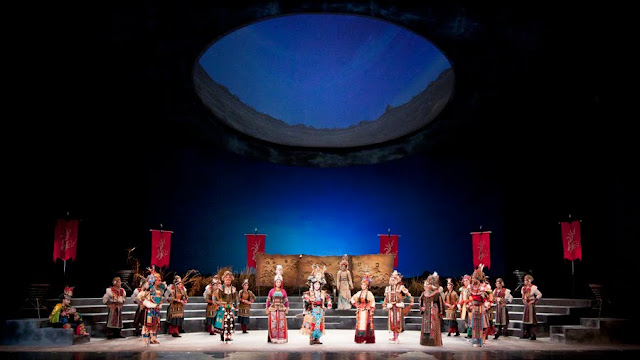 That's all I can find for now, but I'll keep my radar scanning for a DVD release of this magisterial film.
Links: The Taiwan Bangzi Company.
Copyright 2008-2039 by kj at 7:00 AM