The Holy Grail of Shakespeare and Film 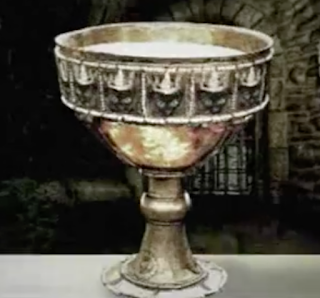 What is the "Holy Grail" of Shakespeare and film for you? What is too expensive, too rare, or too obscure? What is now unobtainable, though it once was available?

I have two lists that spring to mind.

Things that don't exist (though we wish they did):
Things that exist, once existed, or were once promised (but that are hard to track down):

Those are some of my holy grails. What are yours? Tell us about them in the comments!

Note: If you came here looking for the Shakespearean subtitles to Monty Python's film, try this post instead.
Links: The Monty Python Film at IMDB.

Click below to purchase the Monty Python film from amazon.com
(and to support Bardfilm as you do so).

I'd love to get a look and a listen at Richie Havens as Othello in "Catch My Soul".

That's a good holy grail to have! I've searched for that in the past . . . even under the alternate title Santa Fe Satan.

As it turns out, there's now a Blu-Ray release of the film that's not too expensive:

Something for me to track down in the next fiscal year!

Thanks, Anonymous! That's a remarkable find.

I thought of another. Does anyone know if there are any video clips of Antony Sher as Richard III in the 1984 Royal Shakespeare Company production? It's said to be brilliant.

Oh! I've got another one.

The Catherine Tate / David Tennant Much Ado About Nothing.

Yes, I know it's available on some streaming service somewhere, but I object to its lack of availability in other formats—notably the slightly-old-fashioned DVD format.

This is from The Cold Genius (@angevin2 on Twitter):

"Ian McKellen's Richard II. You can watch it online now through the BFI but only if you're affiliated with a university in the UK."

Now that's an expensive film (for those not in the UK). The cost of plane fare is usually much higher than the cost of a DVD.