Book Note: Desdemona: A Play about a Handkerchief 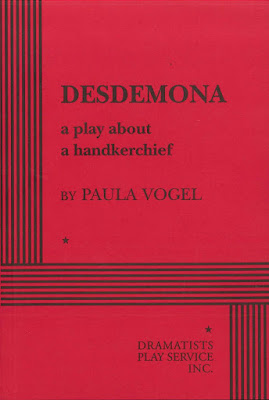 Vogel, Paula. Desdemona: A Play about a Handkerchief. New York: Dramatists Play Service, 1994.
I came across this play only recently, but it's been around for a while.

It's a retelling of Othello with only three roles: Desdemona, Emilia, and Bianca.

It's also a retelling in which Desdemona has been unfaithful to Othello—and with a large number of men (though possibly not with Cassio). She has had affairs here and there, but she also has an arrangement with the prostitute Bianca to take her place occasionally without anyone being the wiser. By that means, she's also slept with Iago.

I don't know quite what to make of the play. Is Desdemona's "free love—exceptionally free love" approach to sex and marriage meant to empower her? Is this an attempt to avoid the quasi-virginal placement of Desdemona provided by many productions of Othello? Is this a humorous re-imagining of what Othello is afraid Desdemona actually is, as in "I had been happy, if the general camp, / Pioners and all, had tasted her sweet body, / So I had nothing known" (III.iii.397-99)?

My own sense is that it's humorous, but it's also quite Desdemeaning.

[Sorry.  I should have resisted.]

It does seem to be demeaning rather than empowering. I'll give you a quick sample from Scenes 9, 10, and 11. Scene 11 is the most clearly connected to Shakespeare's play: it's a reversal of IV.iii, with Desdemona taking on some of Emilia’s positions and vice versa: 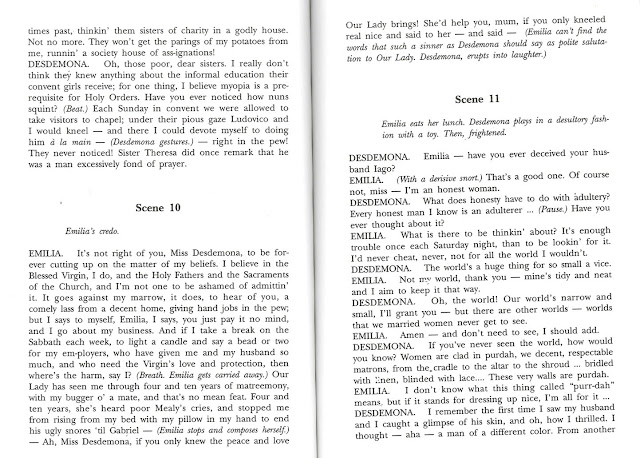 The play is interesting, though crude at a number of points.

Can anyone out there help us better understand the play as a whole?

Note: Elizabeth R provided a link to this New York Times review of a production.  Thanks!

I've never read it, but I found a 1993 New York Times review of a performance of the play:

"[I]t doggedly pursues a familiar political point: in an age of sexual oppression, women can achieve power only as wives or prostitutes."

"[T]he play unfolds as a study in the unwitting destructiveness of feminine relationships in a misogynistic world."

"Though the play is often irritating, it isn't boring."

Thanks, Elizabeth R. That's helpful and most enlightening.