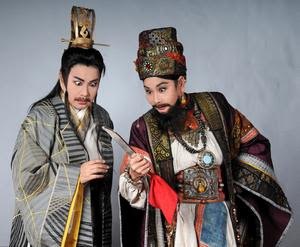 Bond: A Taiwan BangZi Opera Adaptation of The Merchant of Venice. Dir. Po-Shen Lu. Perf. Hai-ling Wang, Mei-li Chu, Chien-hua Liu, and Ya-ling Hsiao. Adapted by Ching-Hsi Perng and Fang Chen. Shakespeare Association of America. Bellevue, Washintgon. 7 April 2011.Because of the incredibly-helpful, beyond-the-call-of-duty work of a Southwest Airlines employee named Craig, I was able, despite heavy fog at the Denver International Airport that caused me to miss a connecting flight, to reach Bellevue in time for the Taiwanese Merchant of Venice at the Shakespeare Association of America’s annual convention.

I was frantic to see it; having seen it, I find that my frantic state should have been upgraded to hysterical. It was amazing. Missing it would have been deeply regrettable.

The production is a Bangzi Opera version of The Merchant of Venice, containing spoken and sung dialogue, almost all of which is accompanied by music from a group of ten or fifteen musicians. The music was brilliant, the voices of the singers were powerful, the costumes were gorgeous, and the acting was sensational. The major parts were all played by women, making the audience bring a similar suspension of disbelief to the one Shakespeare's contemporary audience brought to the threatre when they saw Portia played by a male actor. And the adaptation of the plot was completely intriguing, giving us a great deal to think about.

I'm hindered in thinking about it by two things. First, it's 3:30 a.m., and I'm in the Seattle airport waiting for an early flight out. Second, my copy of Alexander C. Y. Huang's Chinese Shakespeares (for which, q.v.) is over a thousand miles away. His book and a few more hours of sleep would provide a helpful perspective and greater lucidity to these comments—but I'll make a start without them.

The main plot is essentially identical to Shakespeare's. Jessica is cut, as is all that goes along with her, and we don't see any suitors other than Bassanio, but the plot is otherwise the same.

At the core of Shakespeare's play lies conflict between Jews and Christians. In Bond, the two parties are the Saracen and the Cathayan. For the Westerner with limited acquaintance with these terms, this gives a certain exotic flavor to the production, but it also limits the deeper resonances of the historical religious (and economic and social and national) conflict between Christians and Jews. And, in limiting (though not eliminating) that depth, it makes our perception of the Shylock analogue less complicated. In Shakespeare's play, it's easy to be sympathetic to Shylock, and it's difficult to be sympathetic to anti-Semitic characters (and, rightly, impossible to be sympathetic to anti-Semitism itself). In this production, we have an over-the-top, moustache-twirling villain at whom we can far more easily laugh and in whose downfall we can more thoroughly rejoice.

The Shylock analogue is a Saracen—in other words, an Arab trader living in China—while the rest of the cast (with the exception of a minor accomplice for Shylock) are Cathayans—in other words, Chinese. I wish I knew more (and you can be sure I'll be working to find out more) about the way these two groups have interacted throughout history. But the opera presents Shylock as a marginalized—yet significant and even necessary—man who "Takes the bone with the meat when he eats" and charges thirty percent interest on the loans he makes.

Indeed, money serves as the main motivation for the Shylock analogue. When we get to the "Hath not a Saracen?" song, we discover that it is more about money than about religion or about basic humanity. We do get a "What's the difference between us?" song that focuses more on the essential humanity of both Saracen and Cathayan, but the anger Shylock feels at Antonio's lending out money without interest is given a much higher priority as a motivation of his revenge.

Issues of religion are avoided in this production. Although he is an Arab, he is neither Moslem nor Christian (for all the opera tells us). Instead, he serves mammon. While Shakespeare's Shylock says he must demand his bond because he has a vow in heaven, the opera's Shylock analogue twice says, "By my god of wealth, I have sworn an oath."

I believe that this heightens the humor of the play. We can take the Shylock analogue as more of a stock character—the greedy banker—and we can laugh more easily at that. At one point, Shylock seems greatly tempted by the offer of thrice his original loan. His accomplice has to pull him aside and shake his head "No" before Shylock returns to his demand of a pound of flesh. 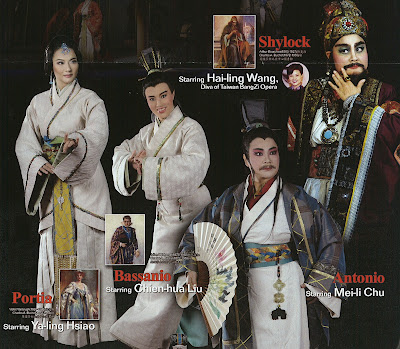 The resetting in an ostensibly less-charged conflict is the main point of interest to me. More minor points include the use of birdcages instead of caskets and Portia's clear hints to Bassanio about which casket he ought to choose, but I'll save those for another occasion.

And I would love to know Alexander Huang's position on the two points at which it is evident—even to the novice—that "authentic" Bangzi opera has been disregarded. The Shylock figure twice slips into English in his responses. At one point, he says, "Right on," which got a big laugh (though I found it more startling than funny); later, he says, "Of course" in English. These two moments seemed to cater to the largely-English-speaking audience at the expense of authenticity. Then again, the production was based on a play by the largely-English-speaking William Shakespeare, so how can I complain?

I bought a DVD after the production, but it doesn't work in my computer, and I wasn't able to exchange it for a different copy. It remains to be seen whether it will work in another computer or in a regular DVD player. If it does, I may be able to provide a clip or two in the future.