Micro-Review of This Wide and Universal Theater by David Bevington 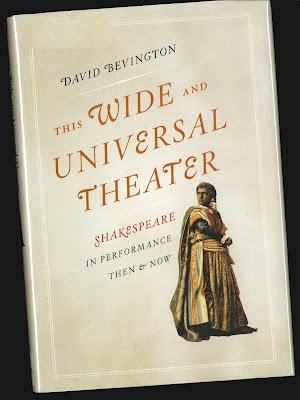 Bevington, David M. This Wide and Universal Theater: Shakespeare in Performance, Then and Now. Chicago: University of Chicago Press, 2007.
If you are drawn to the "Performance History" section of whatever play you're reading—and I know I am—then you'll thoroughly enjoy David Bevington's book. It is filled with marvelous anecdotes about the ways many of Shakespeare's plays have been staged.

I found it to be a delightful read, but it's also a valuable resource for scholars, actors, and directors who are searching for a deeper understanding of the nuances that resonate in every scene Shakespeare ever wrote.

As an example, here's a paragraph from the middle of a discussion of productions of Hamlet:


At Wisdom Bridge Theatre in Chicago in 1985, directed by Robert Falls, Claudius was a Great Communicator in the style of movie-actor turned governor of California and then president of the United States, Ronald Regan: Claudius himself never appeared onstage in 1.2 for his first big scene of explaining the necessity of his marriage to Gertrude, but was instead seen on television monitors to left and right, while the stage itself was given over to his advance men and PR experts setting up for a press party where the "spin" of the new administration was being manufactured. Fading and torn posters of the previous king hung from the walls as a bleak reminder of an administration now nearly lost to memory. Polonius (Del Close) was a businessman in the three-piece suit taking down conversations on his tape recorder; Hamlet (Aidan Quinn) was a young rebel with a cause, spray-painting "To be or not to be" on a bulkhead and then stepping back admiringly to observe, "Now, that is the question." (147)

The book is filled with anecdotes of this sort, complemented with insightful commentary.