David Tennant as Angelo in Measure for Measure 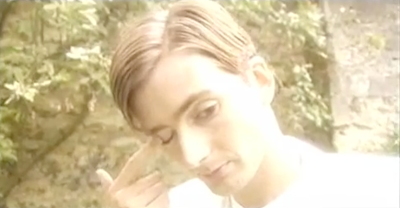 Conjuring Shakespeare. Perf. David Tennant. 10 September 1997.Once again, we have a fragment where we'd like to have a complete record.

David Tennant played Measure for Measure's Angelo in at least one scene for a 1997 documentary entitled Conjuring Shakespeare. There's very little I can find out about that documentary, but a clip of one scene has been making its way around the internet. The threat of violence is present in almost every minute of it. Here's a selection of it (the text and commentary follow):

Isabella
. . . your virtue hath a licence in't,
Which seems a little fouler than it is,
To pluck on others.

Angelo
Believe me, on my honor,
My words express my purpose.

Isabella
Ha! little honour to be much believed,
And most pernicious purpose! Seeming, seeming!
I will proclaim thee, Angelo; look for't:
Sign me a present pardon for my brother,
Or with an outstretch'd throat I'll tell the world aloud
What man thou art.

Angelo
Who will believe thee, Isabel?
My unsoil'd name, the austereness of my life,
My vouch against you, and my place i' the state,
Will so your accusation overweigh,
That you shall stifle in your own report
And smell of calumny. (II.iv.145-59)

The scene shows each of them at their worst. Angelo, of course, refers to his "honor," which he no longer has. Isabella sinks somewhat toward his level—it's a bit like blackmail on her part to demand a pardon for her brother on the strength of her silence about Angelo's—to use a modern term—sexual harassment.
Links: What little is known about the Documentary at IMDB. The complete clip (nearly eight minutes in all).
Copyright 2008-2039 by kj at 5:00 AM

The indecent proposal scene. Very powerful, but is sadly marred by the bad cinematography of this scene.

True enough, Sharky--the cinematography is a bit amateurish, but at least it provides some interesting choices.

Something is better than nothing, but I'd love to have more!

He speaks the text with such beautiful ease and clarity- he makes 400 year old verses sound utterly natural. Bravo!