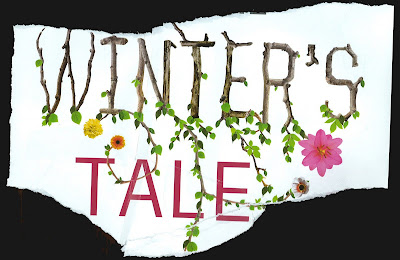 The play is difficult because its scope is so large. There are shadows of Othello (in the jealously of Leontes), Macbeth (in Camillo's contemplation of the murder of an anointed king), Hamlet (with Perdita's distribution of flowers), and A Midsummer Night's Dream (with surreal elements creeping in from time to time).

A review of this production is also difficult for similar reasons. This is a big, big production. It's amazing how much is going on! To make it a bit more manageable, I'm breaking it into categories ("Brilliant," "Interesting," "Unusual," and "Uncertain") below.
Note: There may be inadvertent spoilers here. If you'd rather not know beforehand, go see the play before reading further.

Now while I speak this, holds his wife by the arm,
That little thinks she has been sluiced in's absence
And his pond fish'd by his next neighbour, by
Sir Smile, his neighbour.

Interesting.
Unusual.
Uncertain.
But don't get me wrong about those "Uncertain" items. The play is so large and the production so enormous that there's room for things to be slightly uneven.
You should certainly go see this play. And don't forget to check the details on discount tickets to the Guthrie that you can get by mentioning Bardfilm!Note: I just discovered a brief video clip from the Guthrie's website. It will give you a general sense of the production (including, at the end, part of the bluegrass version of "The Passionate Shepherd to his Love"):

Links: The Play at the Guthrie Theater.