A Brief Review of The Boy who would be Shakespeare: A Tale of Forgery and Folly 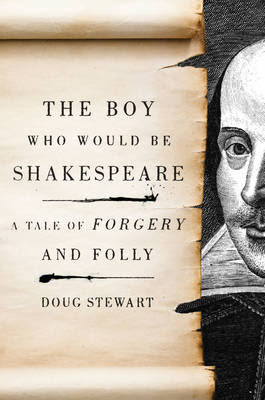 Stewart, Doug. The Boy who would be Shakespeare: A Tale of Forgery and Folly. Philadelphia: Da Capo Press, 2010.
Samuel Schoenbaum's Shakespeare's Lives (for which, q.v.) writes in a very scholarly way about William-Henry Ireland, one of the great forgers of Shakespeareana the world has ever known. Doug Stewart tells the story in more detail and with a more popular audience in mind.

The story of Ireland's discovery of a gigantic collection of undiscovered works by Shakespeare (for a tiny glimpse of which, q.v.) consists of equal parts tragedy, humor, and incredulity.

The basic story could be put as a question of supply and demand. William-Henry Ireland saw that the world longed for more Shakespeare—particularly, documents in his own hand. His father, a collector and dealer in rare items, was extremely keen to get a Shakespeare signature. Well, who isn't, to be honest? William-Henry supplied one. From that starting point, he forged letters, poems, financial transactions, legal documents, and a play. 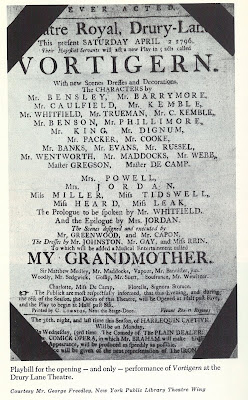 Stewart writes very engagingly about the topic throughout his work, but one of the most interesting passages is his description of the opening (and closing) night performance of Vortigen, a play Ireland had duped many people into accepting as an undiscovered work by Shakespeare himself. The audience that night—2 April 1796—was mixed with those who fervently believed they were about to see a performance of a play lost for nearly two hundred years; those who, following Edmund Malone, the greatest Shakespeare scholar of the age, were intensely skeptical about the whole affair (the Malonites); and those who were simply caught up in the curiosity of the moment.

Here's Stewart's account of the chaos at the end of the play:


In the climactic fifth act, King Vortigern . . . recounts a vision of hell that has just gripped him . . . . After describing with horror Death's "rattling fingers" and "bony jaws," Kemble came to the words "And when this solemn mockery is ended . . . ." The actor drew out the line, William-Henry recalled, "in the most sepulchral tone of voice possible." Immediately, as if it were a prearranged signal to the Malonites—which William-Henry was convinced it was—"the most discordant howl echoed from the pit that ever assailed the organs of hearing." There was bedlam for at least ten minutes.

According to William-Henry's account, when the theater had finally calmed down, Kemble, "in order to amuse the audience still more," repeated the line in an even deeper and more emphatic voice. He left no doubt as to what mockery he was referring to. Again, the audience burst into prolonged whistling and sarcastic cheers. Kemble had to beg the crowd once more to allow the performance to continue.

At this point, Vortigen was doomed, even though the rest of the play was performed without disruption. At the final curtain, prolonged booing was mixed with enthusiastic applause. Mrs. Jordan, still in a boy's tights, delivered the epilogue with her customary good cheer. She was given an ovation for her efforts—a gauge more of her popularity than the play's. On Sheridan's instructions, the actor playing Aurelius, who used the stage name Barrymore, announced that Vortigen would next be performed on Monday evening. His words were quickly shouted down by catcalls and heckling from every part of the theater. Fighting broke out among believers and non-believers. Charles Sturt, swaying drunkenly next to his box, gripped a stagehand in a headlock and was pelted with oranges. (183-84)

The book is a delightful and interesting read, proving useful insight not only into the forgery itself but into the keen desire we all share to have more of Shakespeare's work.