Will's Quill: A Shakespeare-Related Children's Book by the Author of Corduroy 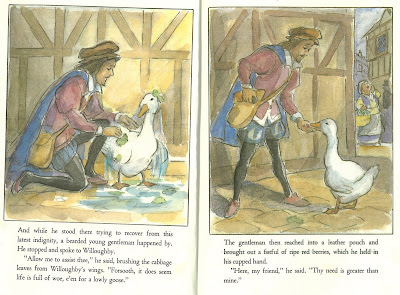 It's good—despite the faux-Elizabethan dialogue that is a bit strained: "Forsooth, it does seem life is full of woe, e'en for a lowly goose," as you can see in the image above (to enlarge the image, simply click on it).

However, it's not without its multi-age humor. When the man we first meet in the image above offers the goose (our protagonist) some berries, he says, "Here, my friend . . . . Thy need is greater than mine," making us wonder if we've run up against Sir Philip Sidney.

The gentleman turns out to be Shakespeare himself. And Willoughby Waddle (for that's the name of our heroic goose) saves the day in a manner that I will not reveal to you. I'm afraid you'll have to track down Will's Quill to satisfy your curiosity. I will say this: It has something to do with a quill from a goose and William Shakespeare.

"IT'S not without ITS multi-age humor"

Thanks for catching that, Arno!

I'll have to be on the hunt for this one. A quick spin through Amazon shows that it's available from individual resellers (not my favorite way to buy things), and Powells does not have it.