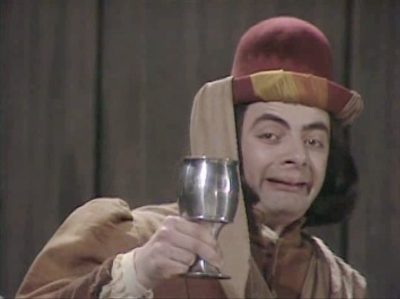 The opening sequence is really quite marvelous. It presents a revisionist version of Richard III. Here, he's not a misshapen tyrant. No. Instead of a hump under his cloak, he carries a bag of toys! Instead of being hunched over—well, you'll see.

The most intriguing part of this clip is the mixing of lines from Richard III with some from Henry V in a revised version of the speech before the Battle of Bosworth Field.

Of course, the comic version of Richard III's calling for a horse is also brilliant. Oh, and the visual allusions to Olivier's Henry V (that's the same crown) were beautifully done.
Links: The Episode at IMDB.

It was impressive because some information was great. I've been looking forward for more details about Richard. Keep on posting!