A Few Brief Comments on Gnomeo and Juliet 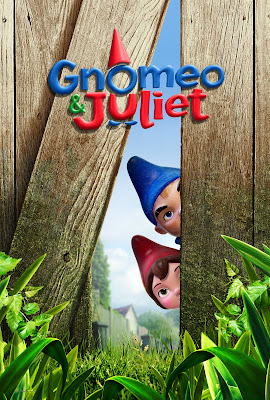 Gnomeo and Juliet. Dir. Kelly Asbury. Perf. Emily Blunt, James McAvoy, Michael Caine, Maggie Smith, Patrick Stewart, Stephen Merchant, Hulk Hogan, Ozzy Osbourne, and Elton John. Touchstone Pictures. 11 February 2011. I have an awful lot on my plate for the next few weeks, but I saw Gnomeo and Juliet this past weekend, and I wanted to get some ideas down before they fade. It's a fabulous, fast-paced film that is exceedingly well-crafted, well-voiced, well-conceived, and well-presented. It's absolutely delightful from start to finish. If you haven't yet seen it, stop here and go see it instantly. Otherwise, the spoilers below may detract from the joy of your experience of the film.

At first, I thought of titling this post "Meta-theatricality in Gnomeo and Juliet," but that seemed a bit heavy. Still, that's the point of this film that caught my attention (and forgive me if this ground has already been covered—I've been intentionally avoiding reviews of the film until I could see it myself).

The film has a character called "Bill Shakespeare" (voiced to the point of absolute perfection by Patrick Stewart); his appearance brings the self-reflexivity to the fore. Gnomeo tells Bill (who is a statue) his story, and that story reminds Bill of a story he once told. Of course, Bill's story ended tragically—with the deaths of the two lovers in question. The character is actually slightly smarmy about it, insisting that he likes the tragic ending better than other possible endings Gnomeo suggests. And he keeps saying, "I told you so!" when things look bleak.


In this, the film stunningly builds in a counterargument to its own existence, reminding us that there may be those who want Shakespeare to stay Shakespeare—those who argue that a derivative version of Shakespeare (particularly one that changes the ending so drastically) is too far from Shakespeare to be Shakespeare any longer. But it simultaneously makes the case that derivative versions of Shakespeare can be evaluated on their own terms. Yes, something has changed, but we can find interest and significance in what the new entity offers. Much more could be said on that topic alone—it's one point where the film opens a debate and expects its audience to think about it.

The end of the film is, in essence, a curtain call. All the characters make an appearance (even the one we thought smashed beyond repair), and we are reminded that the opening introduced us to a play rather than a film. That, too, was a marvelous device, making us think that all these gnomes are actors putting on the story of Gnomeo and Juliet, and we start to think that they are "The best actors in the world, either for tragedy, comedy, history, pastoral, pastoral-comical, historical-pastoral, tragical-historical, tragical-comical-historical-pastoral, scene individable, or poem unlimited," as Polonius puts it (Hamlet, II.ii.396-400).

And, in the category of other things I'd like to mention, I was a bit put off by some of the jokes geared toward the older audience exclusively. For example, the Nurse analogue (Nanette, the frog) comments that Juliet has some "junk in the trunk," and I think that's unnecessary. Come to think of it, it's also fairly unfunny.

But the sound effects were perfect. Whenever a gnome would brush up against another, grating noises—however slight—occurred. It reminded us effectively of the way these gnomes are unlike us—even while convincing us that we are very much alike.

At some point, I'd like to think more deliberately through the film's ending. [Note: Specific Spoilers Follow.] The blame for the chaos and destruction at the end is interestingly divided. The main instigator of the demolition is an inanimate object—by which, I mean an object that is more inanimate than garden gnomes are normally thought to be. Because the destruction comes from an out-of-control lawn tractor rather than from any specific gnome (though, certainly, specific gnomes start the sequence of events leading up to the devastation), the guilt is somewhat sublimated. Still, both red and blue gnomes acknowledge the blame, and it's shared evenly among all parties.

The film is something you should certainly see. And if you need further convincing, here's the trailer:
Links: The Film at IMDB. The Film's Official Website.
Copyright 2008-2039 by kj at 9:33 AM