Word and Rite: The Bible and Ceremony in Selected Shakespearean Works 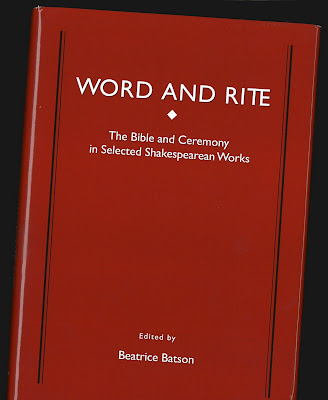 Batson, Beatrice, ed. Word and Rite: The Bible and Ceremony in Selected Shakespearean Works. Newcastle upon Tyne: Cambridge Scholars Publishing, 2010. Print.
Please forgive a bit of shameless self-promotion. An article I wrote has just been published in a collection of articles that relate in some way to the use of the Bible and / or the use of rites in Shakespeare.

The articles are all revised and expanded versions of those presented in 2008 at the Shakespeare Institute at Wheaton College, and they are all well worth reading. Leland Ryken's "Shakespeare and the Bible," Grace Tiffany's "Being English through Speaking English: Shakespeare and Early Modern Anti-Gallicism," and Jeffry Knapp's "The Authorship of Confession in Shakespeare's Sonnets" (Knapp recently published Shakespeare Only, a stupendous contribution to the field) are only three of the eight great articles in this volume.

One of the blurbs on the back (written by Dennis Taylor, Emeritus Professor of English at Boston College) reads as follows:


A rich collection of essays by influential Shakespeareans, including perceptive discussions on Shakespeare's anti-Gallicism, valorizing of the English language due to the influence of the English Bible, on his use of maimed marriage rites as exploration of the parallel structures of marriage in Measure for Measure, on the use of baptismal and Eucharistic rites in Julius Caesar, on his self-identification as a "Will" in the sonnets, and reflections on the apocalypse in The Tempest. Continual food for thought.

My own contribution is entitled “‘Why, You are Nothing Then: Neither Maid, Widow, nor Wife?’: The Ritual of Comedy and the Rite of Marriage in Measure for Measure.” It attempts to explain English Renaissance marriage rites and the rites of English Renaissance comedies in order to understand Shakespeare’s use of both in Measure for Measure, providing insight into the genre of "problem comedy" as it does so. 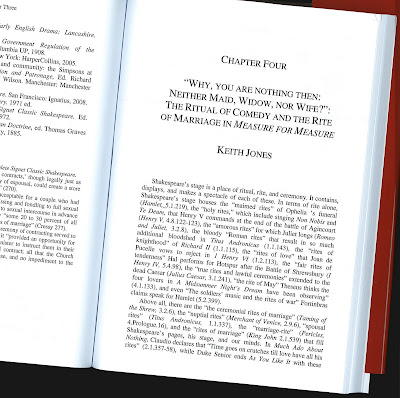 The book may be too expensive for most individuals, but it's ideal for both public and research libraries.
Links: The Shakespeare Institute 2008 page at Wheaton College.