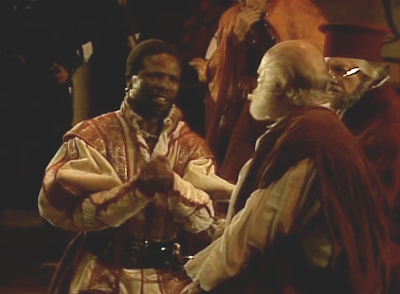 The play was straightforward; it was set in Venice and Cyprus, not in contemporary South Africa. But the venue, the time, the place, and the cast combined to produce a political statement of the clearest kind.

In 1988, the stage play was filmed for television; in 2005, a DVD of that filming was released. In the liner notes for the DVD, Suzman neatly articulates the implications of the production:


The story of a mixed marriage systematically destroyed, when you analyze it, on a mere whim, seemed to embrace the larger context of South Africa just perfectly. (12)

. . . it seemed to me that the play's characters divide pretty neatly into a microcosm of not only South Africa, but perhaps of any society in the West: the out-and-out bigots (Iago, Roderigo—for it is he who dubs Othello "the thick lips"); the armchair liberals (Brabantio, Gratiano); the pragmatists who judge things on their merits (Emila, Lodovico); and those who simply don't see color at all (Desdemona, Cassio). (17)

The production itself goes a long way toward demonstrating the racial tensions of contemporary South Africa—and of other countries today. Here's Othello's defense of himself in the face of Brabantio's accusation that Othello has won Desdemona's love by witchcraft:

Several things stand out in this scene. Stuart Brown's Brabantio seems to represent—and to embody—Old South Africa. He shies away when Othello places his hand on his shoulder. At the end of the scene, he puts Desdemona's hand in Othello's, but he does so with despairing resignation.

John Kani's Othello does not exactly embody Black South Africa, but he does play with the stereotypes Brabantio attempts to tie him to. On the line "This only is the witchcraft I have us'd" (I.iii.169), he mimes something like throwing bones. In his position, it looks ridiculous, and that undermines the idea; however, the accusation of witchcraft lingers in the air around that gesture.

Joanna Weinberg's Desdemona perfectly demonstrates the strength of her character at this point in the play. She recognizes the duty she owes (or owed) her father, but she is unwilling to disclaim the duty she now owes her husband.

The tragedy—from his point of view—of the loss Brabantio suffers expresses itself in the pause Brown delivers before each instance of the word "heart" in these lines: "I here do give thee that with all my heart / Which but thou hast already, with all my heart / I would keep from thee" (I.iii.193-95).

But the hope Desdemona, Othello, and at least some members of the audience feel is also present in this scene. A drastic change has taken place—and the future, at this point, appears bright.

Suzman writes about the audiences' (yes, that's an apostrophe that intentionally indicates a plural possessive) reactions to the production:


What was so fascinating to me . . . was how divided on some nights the audience was. Factions would start up sometimes; a white hissing "shush" to a noisily participating black. Sometimes the black punters would laugh in the most serious bits, as if the tragedy in their own lives could not be matched by that onstage, or as if laughter were the only way to stave off the tears they had enough of in reality. Who knows why? Sometimes there would be a shout of "look out behind you!" to Emilia as Iago stabs her in the back. Pindrop silence is unfamiliar in Africa in any case. . . .

Sure, a few people walked out in dudgeon when Othello and Desdemona first kiss. Hate mail was duly penned, from the usual fringe of lunatic hard-liners who had never set foot in a theater. But as the run progressed, The Market's normal 10 to 15 percent black audience for a European play jumped to an unprecedented 40, 50, and then 60 percent. Every age and color poured in to see this dreadful tragedy unfold. I suspect that it will not happen again; it was a play that had found its time and place. The readiness was all. (29)

I would I had been there; it would have much amazed me.
Links: The Film at IMDB.

No, it wouldn't; I saw it and Suzman's direction left a lot to be desired. The cultural significance aside, it was not a great production.

You're making us curious!