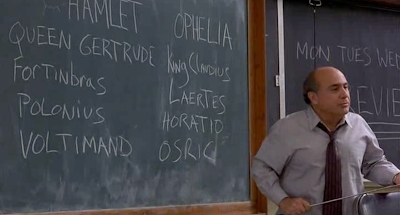 Renaissance Man. Dir. Penny Marshall. Perf. Danny DeVito and Gregory Hines. 1994. DVD. Walt Disney Video, 2003.
On this Friday, we have an post that is even more informal than the usually-somewhat-infomal posts at Bardfilm. Renaissance Man, staring Danny DeVito, is nearly the opposite of the Almereyda Hamlet or Hamlet Goes Business.

The text of Hamlet is employed as a device in this film; apart from one character whose father has been killed, there's relatively little of the plot of the play in the plot of this film. The movie is one of a number of formulaic "people labeled as misfits find their way into a classroom where a teacher, though hard work, trust, and perseverance, gets through to them" films that are always described as "heartwarming." It's the kind of film that you steel yourself against whenever they try to manipulate you.

And yet it works.

The unemployed advertising executive takes on a job teaching at an Army base. He's assigned the soldiers who are classified as unable to use their brains well. Eventually, Hamlet becomes the means for teaching these soldiers how to think. Here's a scene where the physically-gruling work of basic training is counterpoised by the intellecutally-thrilling work of reading Shakespeare. It concludes with a Hamlet-related cadence call:

Later in the film, the Drill Sergeant (played by Gregory Hines) asks one of the soldiers to come forward and recite some Shakespeare. In the rain and the mud and the night, the soldier gives the St. Crispan's Day speech from Henry V. That may be the high point of the film. The soldier, the Drill Sergeant, and the rest of the troop both get it and are moved by it.

If you're willing to allow yourself to be emotionally manipulated to a certain degree, Renaissance Man can be enjoyable. And Danny DeVito has developed a character who is genuinely passionate about and takes real comfort in the words of Shakespeare.
Links: The Film at IMDB.

You know, I remember liking this movie generally for the reasons you cite. But thinking back on it I can't help but associate a big "band of brothers" ending as sounding like the note Anthony Michael Hall writes to the principal at the end of Breakfast Club, you know?

That's precisely it! Everyone learns something—even the outrageous Drill Sergeant. In fact, at the very end of the film, the Hamlet Cadence Call is appropriated by the Drill Sergeant: he uses it with the next group of soldiers.