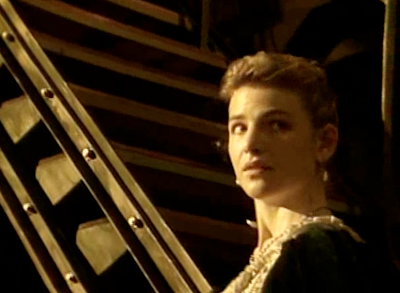 Othello. Dir. Janet Suzman. Perf. John Kani, Joanna Weinberg, Richard Haines, Dorothy Ann Gould, and Stuart Brown. 1988. DVD. Arthaus Theater, 2005.Janet Suzman's production of Othello admirably focuses our attention on Desdemona. This narrative is the story of the tragedy of Othello—but, in Suzman's production, we cannot forget that it is also the tragedy of Desdemona. Desdemona has rejected the norms society and Brabantio have placed on her—only to find that Brabantio and society have rejected her for so doing. Then the love she felt secure in—the love that made it all worthwhile—starts to reject her, too.

The scene below is something of a companion piece to Othello's defense against witchcraft, and it's tightly woven to that earlier scene by more than the language of magic:
Othello, III.iv.51-99
Othello ostensibly turns from abjuring the use of magic to endowing the handkerchief with magical properties.

But Desdemona's response is even more interesting than that. In I.iii, Othello tells us that Desdemona responded to some of his tales in this way: "She wish'd she had not heard it" (I.iii.161); here, we see the same reaction for ourselves: "Then would to God that I had never seen't!" (III.iv.77).

Joanna Weinberg's performance as Desdemona enlists our sympathies enormously at this point. An interracial marriage in a Shakespeare play or under Apartheid in South Africa isn't easy. In this scene, we see the bewilderment and pain of Desdemona as she tries her innocent best to move forward with Othello.
Links: The Film at IMDB.