Shooting the Hero: A Shakespeare and Film Novelization 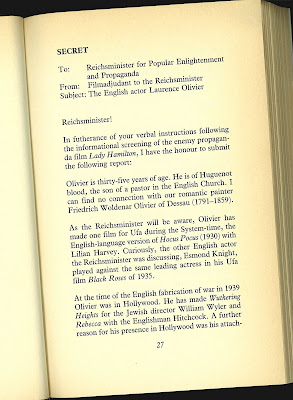 Purser, Philip. Friedrich Harris: Shooting the Hero. London: Quartet Books, 1990.
I read the first sentence, and I was hooked.

Friedrich Harris, the ostensible autobiographical narrator of Philip Purser's novel is a half-Irish / half-German German film industry worker during World War II who is given the task of sabotaging Olivier's Henry V during its filming. The German Ministry of Propaganda has heard of the film and has recognized its value to the Allied forces.

In that fact (and in many other details), the novel maintains a tight connection to history. The film was, in fact, released on 22 November 1944, six months after D-Day. [Note: The Wikipedia entry for the film currently (and inexplicably) lists a date in July for its theatrical release.]

The novel is a spy novel—but with more going for it than just the suspense and adventure typical of the genre. We get down into the nitty-gritty of the film world, seeing the filming of Henry V from the perspective of the extras; the horsemen; and, finally, the Constable of France—whom Henry engages in single combat at the culmination of the Agincourt sequence.

Although aware of the danger that this sample may hook you and force you to track down the novel so that you can read more, I'll provide the opening paragraph (which is also the opening sentence):


When I watched him in one or other of those stupid roles of his old age; when for example he played the Jewish poppa in a vile remake of The Jazz Singer, or on television a Roman elder in some laughable epic continuing over two or four evenings; when he was inveigled on to one of those ceremonies at which today’s film makers “salute” each other, and he would address them in the quavering voice he affected on such occasions; when I saw these things and remembered how once he could strike fire, summon music and bring down thunder with one cry, then I would groan aloud that I had not killed Laurence Olivier when I had the chance. (1)

Once you read the novel, head back to Olivier's Henry V. You'll never see the fighting sequences in the same way. Doubtless, that will be true for the German film that forms a major part of the novel and serves as a foil to Olivier's: Kolberg.