Book Note: The Merry Conceited Humors of Bottom the Weaver 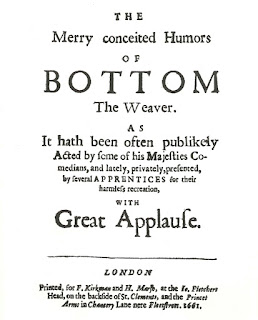 The Merry Conceited Humors of Bottom the Weaver as it hath been often publikely Acted by some of his Majesties Comedians, and lately, privately, presented, by several APPRENTICES for their harmless recreation, with Great Applause. London: F. Kirkman and H. Marsh, 1661. Facsimile. London: Cornmarket Press, 1970.
You say you really like the rude mechanicals scenes in Midsummer Night's Dream but all that stuff about the four lovers and the Duke and his Duchess-to-be bores you stiff?

Have I got the play for you.

In 1661, an edited version of Midsummer Night's Dream was published. Essentially, it has all the Bottom the Weaver scenes (including, of course, the ending play-within-the-play) and a little of the necessary surrounding plot (Oberon sending Pugg—he's called Pugg in this version—out for some love potion).

Stanley Wells wrote the introduction; in it, he says, "As an abbreviation for amateur performance this is a competent piece of work."

I've edited a lot of Shakespeare for amateur performance, and I find the decisions this text makes to be fascinating. Whoever did it had a limited cast and didn't want to be bothered with things that would distract from Bottom's plot. For example, we don't need all that backstory for Oberon and Titania, but we do need a little something to explain why he's putting love potion on the eyes of the Queen of the Fairies. A little tinkering and a few Shakespearean-sounding lines will fix it. Here's Oberon's first speech in this version of the play:


I am resolved and I will be revenged
Of my proud Queen Titania's injury,
And make her yield me up her beloved page.
My gentle Pugg come hither[. T]hou Rememberest
Since that I sat upon a Promontory,
And heard a Mermaid on a Dolphin[']s Back . . .

And we're off and running with Shakespeare's words from the fourth line above.

I'll give you a few sample pages. Here's the cast list and the opening of the play: 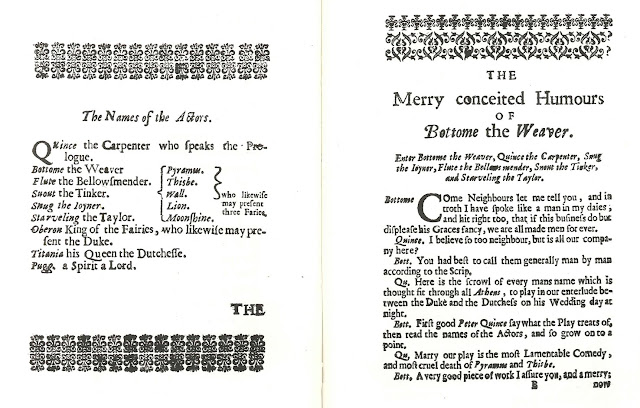 And here's when Pugg enters to see the rehearsal and Bottom is translated: 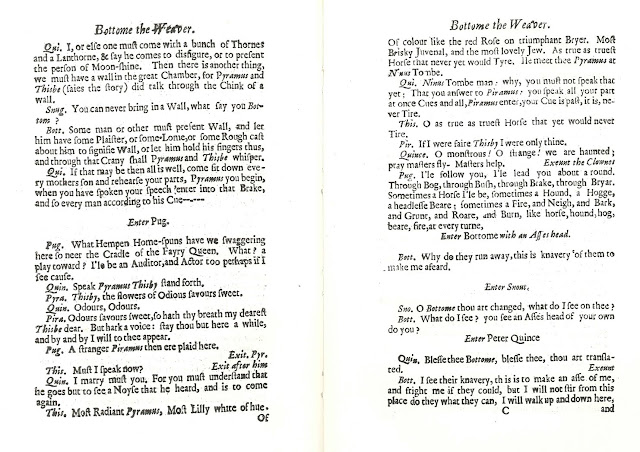 In The Merry Conceited Humors of Bottom the Weaver, the cry is "Bless thee, Bottom, thou art edited!"
Click below to purchase the book from amazon.com
(and to support Bardfilm as you do so).