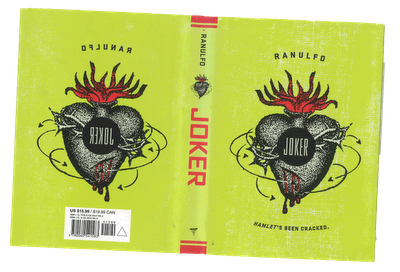 Ranulfo. Joker.  New York: HarperTeen, 2006.
A much more interesting Hamlet novel is Ranulfo's Joker. The novel's narrator is a Hamlet analogue who genuinely seems (at points) to be insane. Ranulfo, the novel's author, was born in the Philippines and lives in Australia, where the novel is set. I don't know much more than that about him, but his writing is quirky and, on the whole, enjoyable. As an example I'm providing the first two short sections. The first seems to be in the voice of Hamlet's father's ghost—but is it? When the second section begins, the book throws a curve ball:

So here I am in hell. Who would have thought it? Oooh! Aaaah! Ouch! Hell is hot—really, really hot. And there’s no cool evening to look forward to. No snows of winter coming around the corner. No jolly spring to frolic in. Just a monotonous room temperature of a million degrees Celsius or Fahrenheit, makes no difference which.

Hey, Hitler! But Hitler does not return my Nazi salute. Thinks I’m poking fun at him. He’s sooo serious. Lighten up, dude! But then again, he’s already lit up. Ha-ha.

Incredibly, no matter how cremation-hot it gets, the skin does not burn or melt—it just sizzles and crackles, so everybody’s still recognizable. It’s jam-packed here. Chockablock with politicians, generals, CEOs, celebrities; in fact, I think all of humanity that ever was is here. The joke is God hates humans. He loves dogs, and only dogs go to heaven. So if a child asks you if dogs go to heaven, tell them yes, but you’re not because you are a dirty, lying, hypocritical, apathetic, bigoted, self-righteous, self-deluding human.

Oooh! Aaaagh! It’s hard to hold a conversation in hell when everybody’s screaming in agony all the time. Extreme pain is not conducive to hobnobbing and small talk. Out of my maw: just deep primeval screams, hysterical shrieks, lamentations, beastly grunts, horrendous howls. AWOOOOOOOOHHHH!!!!

You didn’t know that this fine hunk of an orb that greets you in the morn is actually a fiery penal colony. You see, all the stars are places of punishment. So don’t get romantic when you gaze at the twinkling stars, for before you are 4 billion souls crying for mercy that never never comes.

But that would be nice. To be able to gaze at the stars, holding hands with someone you love. A soft, kind, breeze. An ice-cold drink. A lingering, mushy kiss. A river to dip in. Cool, refreshing, clean. Oh, if I could only sleep.


Me and my Shadow

Just kidding around. Hee-hee. I’m still much alive on this dumb-ass planet. Except the last bit, which is true. I can’t sleep. Or rather my busy brain can’t shut down—it’s just bubbling, festering, exploding, corroding, spitting, spewing all kinds of thoughts/emotions/fantasies. But there was a fairy time ago I could just hit the pillow, bring down the curtains of my eyelids, and I’d be snoring away in slumberland.

But no more. Not since the birth of Joker.

He is crazy, a lunatic, a fool, who laughs at everyone and everything. He is a voice and a shadow. He is inside me. Sometimes he possesses me totally. Sometimes he hides and crouches, ready to pounce. Endlessly, I hear his laughter. He makes me see things—visions, hallucinations, nightmares, epiphanies. I love/hate him.

Before Joker I was serious Matt—athlete, top student, and Mr. Cool of Elsinore High. I had a great mate called Ray, had (actually still have, but the sweetness has soured) a sweet, beautiful girlfriend, Leah—I was one lucky dude. My parents envisioned great things for me. Elsinore, a little Aussie town off the north coast of New South Wales, was of the opinion that I was going to conquer the world. Then it all fell—crash! kaboom! —apart on me.

My mum left my dad and remarried. My best friend Ray got murdered. Two towers came crashing down—Love and Security. My soul is ground zero: smoldering ashes and ruins.

At seventeen I have hit rock bottom.

The day Joker was born I was at church with Leah. In his sermon (typically soporific) the priest commented on how much God loved us. Normally I don’t dwell too much on what the priest says—I let everything slide by. Priests are Muzak to the soul.

But this time a voice whispered to me. A weird, derisive voice. At first I couldn’t catch what the voice was telling me. Slowly it became clearer. “If God loves us, why doesn’t He pick up a phone and tell us so? Why doesn’t He give us a big hug when we’re down? Why doesn’t He fly about like Superman and protect people from danger? Why doesn’t He speak to us instead of letting anybody who calls himself a believer speak in His name? Why doesn’t He make everyone good-looking and sexy? Why couldn’t He create a bigger planet to cater to our greed? Why couldn’t He give us wings so we wouldn’t need to consume oil? Why didn’t God create us in His image—a cat? [sic: no closing quotation mark] I felt like I was cracking open my mind for the first time. All my life I had asked the wrong questions. Questions which already had the answers. Questions provided to me by authorities. Questions which did not spit or snarl or scream. But these questions I was hearing were different. They pushed and shoved me out of my comfort zone, led me down a dark terrifying hole, subverting everything I believed in, tearing and churning up my brain. I began to giggle. Perhaps at the priest, who couldn’t answer Joker’s questions. Perhaps at God, who created us—or did we create Him? Perhaps at myself, who was the biggest idiot of all, who jumped and rolled over when commanded, who got top marks by memorizing and repeating lies dumbly like a parrot. I who thought I knew everything now knew nothing. Big fat zero. Life was just a big joke. I desperately tried to suppress my laugher. Leah kept elbowing and hushing me to quiet down. I couldn’t contain myself anymore so I rushed out of the church to let it all out.

I was laughing so hard that my ribs began to hurt and I thought I was having a heart attack. Sometimes I wish I had died then.

During my hysterics I noticed a teenager breaking into a car and swiping a cell phone, which the owner had foolishly left inside. Customarily I would have done the superhero—Mighty Matt!—deed and nabbed the thief; instead I just enjoyed myself like I was watching Funniest Home Videos on TV.

The thief glared at me and said, “What’s so funny?”

I smiled at him, like he was my best-ever friend.

“I am,” said the joker to the thief. And lo and behold, a voice from heaven said,

“This is Joker with whom I am not pleased.”

That should give a flavor of this novel.

The novel also deviates from the plot in intriguing ways.  I'll give you one set (even though it's a slight spoiler).  The Hamlet analogue's father isn't dead.  He's divorced, and he tends to drink too much and hang around outside Hamlet's house—haunting it, as it were.  As a connected plot twist, the Horatio analogue has died—and his ghost periodically haunts the Hamlet analogue.

Joker is a bit uneven, but it's still quite intriguing.  If you like the section above, you're likely to like the rest of it.