A New Tempest—Somewhat after the Manner of Looking for Richard 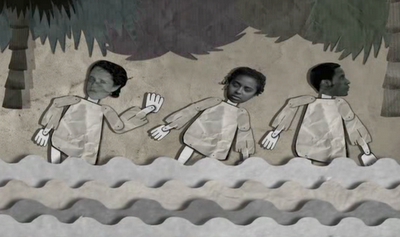 Tempest. Dir. Rob Curry and Anthony Fletcher. Perf. Mitchell Bonsra, Paris Campbell, Kieran Edwards, Charlotte Gallagher, Afra Morris, Stef O'Driscoll, Zephryn Taitte, Emily Wallis, Roy Alexander Weise, and Nathan Wharton. Fifth Column Films. 2 November 2012 [UK Theatrical Release]. Note: The film is now available for view on demand at Vimeo! Give it a try.
Once again, the amount of time at my disposal is infinitesimal, interfering drastically in my ability to keep up with all the amazing new Shakespeare out there.

One of the wonders is Rob Curry and Anthony Fletcher's Tempest, an intriguing mixture of documentary, rehearsal, performance, and stop-motion animation sequences that is beautiful in just about every sense of the word.  Since I've been far too lax in commenting on it—and since its UK release is just over a week away—it's time to bring our collective attention to it.

The film shows a number of people from—well, I suppose I can use the cliché and refer to it as a so-called "blighted" area of London. The film follows their engagement with The Tempest over a period of several weeks—or even months. The chronology is not nearly as important as the way the film reveals both the play and those enacting it.

The film starts with traditional images of looting and rioting—and then images of profound beauty. I'm struck with the cinematography of the film—it's not a rough-and-tumble documentary: it's remarkable in its detail and its aesthetic appeal.

On the IMDB page for the film, its director, Rob Curry, describes the film: “Using a blend of drama and documentary, the film follows the kids’ progress as they stage the play, building a portrait of the contradictions of what it means to be British in this brave new world.”

I've selected a brief clip that will not give away too much but which will reveal several different facets of the film. It shows actors talking in character about their roles, a short animated sequence, a bit of rehearsal, and a bit of staging: