On Shakespeare's "Christian" Sonnet, Its Hymn Tune, and the Wonder of Librarians

Songs of Praise: Enlarged Edition: With Tunes. Words ed. Percy Dearmer. Music eds. Ralph Vaughan Williams and Martin Shaw. Oxford: Geoffrey Cumberlege, 1926.
While reading an article on Sonnet 146—Shakespeare's "Christian Sonnet," as it is often called—I found the interesting fact that the sonnet had been printed (at some point) in a hymnal (of some kind) to be sung in churches. The two questions that sprang immediately to mind were "Which hymnal?" and "What tune?"

The article, unfortunately, answered neither. And I had neither the time nor the expertise to track down the answers myself.

Reference librarians are simply magnificent.  I sent my request off to ours, together with all the bibliographic material I could muster, and she tracked it down in a few short days.

The sonnet was sung to the hymn tune Congleton. The sonnet and the hymn tune appear together in the 1926 Songs of Praise—which had, as one of its music editors, the great Ralph Vaughan Williams.  In that volume, the hymn tune is described as coming from "The Standard Psalm Tune-book, 1852" and as "attributed there to M. Wise, c. 1648-87" (746).

No, I'm not going to sing it for you.  But I did track down a MIDI file of the tune, and I made this brief video that gives it to you, along with the third verse / stanza.  And I'm sharing the wealth of knowledge provided by the reference librarian by including the full hymn in an image below.


Click on the image below to enlarge the image and to sing Sonnet 146 for yourself! 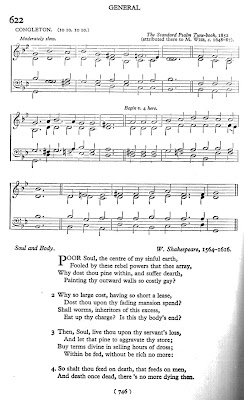 This sonnet, with its address to the soul and its encouragement for the soul to pay more attention to its own development than the mind does to the accoutrement of the body, does seem appropriate for Christian worship—though the sonnet never reaches the Christian heights of John Donne's Holy Sonnets.  But the last line is lovely:  "And death once dead, there's no more dying then."  It can be compared to 1 Corinthians 15:26:  "The last enemy that shall be destroyed is death" (KJV).

Now that we have that hymn tune, we can sing any one of Shakespeare's sonnets—even Sonnet 126 ("Shakespeare's Short Sonnet," which has only twelve lines) to it.  We can even sing Sonnet 99, which has fifteen lines—if we sing two of them together really quickly during one line of the hymn.  But we could also sing them to Ralph Vaughn Williams' tune Sine Nomine, to which "For All the Saints" is often sung.
Click below to purchase the hymnal from amazon.com
(and to support Bardfilm as you do so).