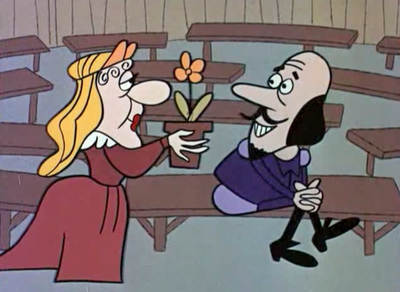 In the clip below, Peabody and Sherman travel back in time to Stratford in 1611 and “help” with a production of Romeo and Zelda.  Admittedly, this is very late in Shakespeare's career and at the wrong location for him to be working away on Romeo and Juliet, but the show generally demands a pretty liberal suspension of disbelief.

To tell you any more would be to spoil the clip below; therefore, you should simply proceed to the clip below and enjoy it for all it's worth.

“O, hark, what hallow light burneth in yonder patio?”
“Egad, the lad's an ad libber.”
Links: The Episode at The Big Cartoon Database.

Click below to purchase the entire seires of this show
(and support Bardfilm by so doing).

LOL, who knew the Globe was apparently in Stratford-upon-Avon?

Perhaps history has it wrong. Perhaps the Globe didn't burn down in 1613—perhaps it was moved to Stratford in 1611!

No, probably not. Just a little bit more suspension of disbelief.