Shakespeare in The Lion King—And, No, it's not the Hamlet Stuff 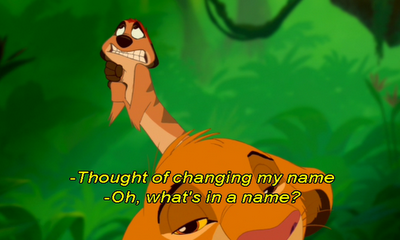 The Lion King. Dir. Roger Allers and Rob Minkoff. Perf. Jonathan Taylor Thomas, Matthew Broderick, and James Earl Jones. 1994. Walt Disney Video, 2003.
Yes, plot elements from Hamlet make their way into The Lion King (you can start exploring the idea here). But did you notice a specific quotation from Romeo and Juliet there, too?

It's in the image above:  In Timon and Pumbaa's first big number, Timon sings the "What's in a name?" line.

He also shares a name with the eponymous character in Shakespeare's Timon of Athens.  I'm just sayin'!
Links: The Film at IMDB.