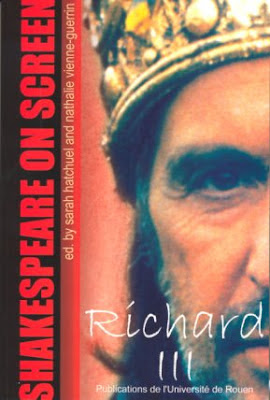 I'm not sure they've done so, but I am sure that you, gentle readers, will find them interesting and valuable. And I hope to post them with minimal commentary over the next week or two. 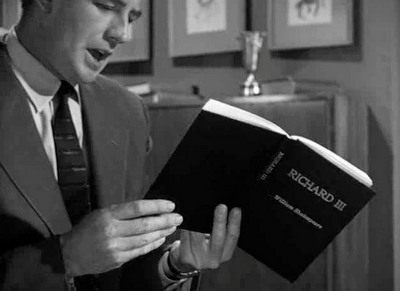 "Silent Witness." By Robert C. Dennis and Jeanne Barry. Perf. Alfred Hitchcock, Don Taylor, and Dolores Hart. Dir. Paul Henreid. Alfred Hitchcock Presents. Season 3, episode 5. CBS. 3 November 1957. DVD. Universal Studios, 2007.
The first one is from the television series Alfred Hitchcock Presents. In it, an English professor has been carrying on an affair with a student. When he tries to break it off, she threatens to expose him. He does away with her—but the baby she was babysitting at the time witnessed the event. The rest of the episode plays with the themes of Richard III as the professor contemplates doing away with the child to cover his crime. Here's the episode's opening:


The professor is reading from Richard's monologue near the end of the play—the one in which he comes closest to repenting of his crimes:


My conscience hath a thousand several tongues,
And every tongue brings in a several tale,
And every tale condemns me for a villain.
Perjury, perjury, in the high'st degree
Murder, stem murder, in the direst degree;
All several sins, all used in each degree,
Throng to the bar, crying all, Guilty! guilty!
I shall despair. There is no creature loves me;
And if I die, no soul shall pity me:
Nay, wherefore should they, since that I myself
Find in myself no pity to myself? (V.iii.195-205)

The full episode is quite intriguing—full of plot twits and with a surprising conclusion. Give it a try!
Links: The Episode at IMDB.

There are more references to "conscience" in Richard III (11) than any other Shakespeare play except Henry VIII (19).