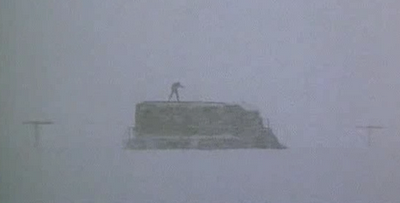 Runaway Train. Dir. Andrey Konchalovskiy. Perf. Jon Voight, Eric Roberts, and Rebecca De Mornay. 1985. DVD. MGM, 1998.
Although the use of Richard III in popular culture can sometimes be nothing more than incidental, it occasionally is used to alter the entire tenor of a work.

Such is the case with the 1985 Action / Adventure film Runaway Train. The film's plot centers on two escaped convicts—one of whom is recalcitrant and unrepentant while the other is mostly just along for the ride. They end up on board a string of four locomotive engines connected together along with a female railway worker; the engineer has a heart attack and dies, leaving the throttle on full—and the emergency brakes locked on. That gives everyone some respite, but the eventual effect is for the breaks to burn out entirely, leaving the three on board a train that is racing faster and faster with no hope of stopping. If they could get to the foremost locomotive, they could potentially turn off the throttle, but for various reasons they seem unable to get there.

Note: In the next few paragraphs, spoilers will abound. Should you wish to let this film's plot unfold for yourself, stop here, watch the film, and come back to add your commentary to this post. Thank you.

By the end of the film, the warden, who is the main prisoner's arch nemesis, has made it on to the train by means of a helicopter. He and the prisoner fight, and the prisoner handcuffs him to the first locomotive. The prisoner then uncouples the other locomotives from the first, climbs to the top of the engine, and awaits his certain doom—and the simultaneous doom of his arch nemesis. The screen whites out, and this quote appears:

The quote doesn't supply the names of the characters, but the quotation marks indicate that it is an exchange between characters rather than a quote from one character alone. In fact, it is part of the scene in which Richard woos Lady Anne:


Lady Anne: No beast so fierce but knows some touch of pity.

The clever argument—technically, it's a syllogism—embedded in the exchange runs something like this: Beasts have pity. Richard doesn't have pity. Therefore, Richard is not a beast.

Richard makes the argument to try to subvert Anne's accusations. Eventually, his attempt pays off—Anne does agree to marry him.

But what does that mean for Runaway Train? Are we to draw the conclusion that this prisoner is, like Richard, both devoid of pity and also the more human because of it? Is that brought into question because the prisoner has shown pity to the others on the train by uncoupling their locomotives from his? Is this prisoner no more than a beast—whatever the logic of the syllogism might suggest? Does the quotation point toward the warden rather than the prisoner, suggesting that he has brought about his own end as well as that of the prisoner by being devoid of pity?

The quotation, by opening these questions, gives the film far more layers than it would otherwise have.

Here are the final moments of the film:

But then maybe he saved the two because it was the right thing and not out of pity.

I think it's talking about life. It's life and existence (symbolised by the perpetual momentum of the train) that have no pity, and therefore are no beast.

Interesting! Thanks, Unknown and Eduard for your thoughts!

My first impression of the reference to the statement to the movie has not changed, even after several viewings of the movie (winter scenes impressively chilling).
No beast so fierce but has some touch of pity..to me this line refers to Voight being a beast throughout the film and in the end, frees his 2 companions so they may live, that being the pity shown by the beast.
But I have none and therefore am no beast...refers to the warden, who showed no pity to anyone throughout the film, and was especially harsh to Voight over the years, his doom a just reward for being that certain kind of human being, to which I suppose we are all capable, as the worst of a species, causing extreme pain for personal enjoyment and position of power.


There's another quote in the movie that seems to be relevant:

The train is also a metaphor for the unrelenting "will' of the 'human beast ' in terms of technological progress, and how men like Manny are unable to stop it (even when they know it's flawed). The look of the train operator at the Space Shuttle on the screen is another philosophical nod to this. I agree with the above posts re the human animal and 'pity' and how it relates to the Manny and Warden characters equally

Thanks, SD Gray and Ronald Lachmansingh. The quote does seem connected; the comment is insightful.

I watch this film back in 1985 and today I watch it again in 2018 still deeply touched by all the characters, I can't blame the warden as he has his duty to fulfill but Manny definitely is the hero saving two lives.

Thanks, Unknown. It's good to see people returning to this film and still finding it rich and strange.

This society rules act in the film as the line between beauty and beast. Thanks bardfilm for the comment and last film screenshot, well done.

Favorite quote "you don't know what you could do, what you can't"

SD Gray ...I think you nailed it. Thanks

Its just the director making fun of us. We look at those animals (prisoners) because we feel no pity and have no mercy but can or should we call ourselves human with that type of attitude?

From beginning of movie and all through Manny was portrayed as a fierce beast. But at end he showed that he was still human.

I do think that the quote about him being worse than an animal being human is definitely connected. Nothing makes it into a movie by accident. I think the quote is all about Manny and is essentially stating that a beast can feel pitty because beasts see the world in simple black and white terms, but he feels no pitty meaning that he is not a beast but is instead human, something much more complex that is actually not good or evil but a shade of gray, as Manny was and all human beings are.

Definitely connected to the end quote.

Pity for others, but never himself.


The theme of a "beast" repeats throughout the film. The "cage" of prison life. The locomotive is referred to as a "Wild Animal" by the controllers looking to derail it.

Manny frees Sara and Buck as he finds his own release. He faces his death headlong and on his own terms. Rage Rage against the dying of the light, comes to mind.

Then the ending quote. The "but I know none" is chilling in it's pitiless humanity.

If you are not a beast thus lower than a beast you are Satan. For Lord God said " lower are you than all animals and beast of the fields..." Genesis 3:10-20