An In-Depth Exploration of Richard III, Act I, Scene ii 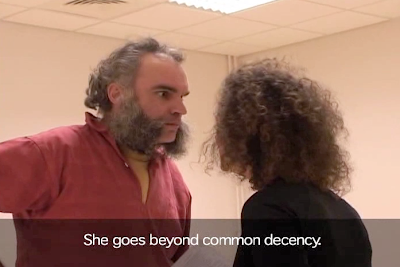 Looking for Anne. Dir. Gérard Dallez. 2005. DVD. Equipe de Recherche sur les Aires Culturelles, 2005.
Included in the volume Shakespeare on Screen: Richard III (ed. Sarah Hatchuel and Nathalie Vienne-Guerrin, Ruon: Publications de l’Université de Rouen, 2005) is a short film entitled Looking for Anne. When I requested the book through my stalwart Inter-Library Loan connections, I was under the assumption that it was a complete film that told the plot of Shakespeare's Richard III from Lady Anne's point of view. Even though that turned out not to be the case—causing some inevitable collateral disappointment—the film itself provides a good deal of commentary on and discussion of Act I, scene ii of the play: The scene in which Lady Anne accepts Richards proposal of marriage.

There's considerable discussion—in French (with English subtitles)—about the scene, and one participant seems to have a cockatoo on her shoulder for no readily-apparant reason. And then comes the fun part. The actors attempt to put all they've been discussing into the scene itself.

The discussion here typifies the threefold conversation that frequently happens in my classroom about this scene:

Click below to purchase the book
(and the film that should come with it) from amazon.com
(and to support Bardfilm as you do so).