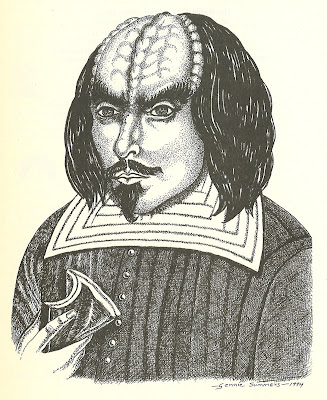 Shakespeare, William. The Klingon Hamlet. Trans. Nick Nicholas, Andrew Strader, and the Klingon Language Institute. New York: Simon & Schuster [Pocket Books], 2000.
The performance of selections of Hamlet and Much Ado About Nothing in Klingon by the Washington Shakespeare Company received a fair amount of attention. One review quotes Christopher Henley, the Artistic Director, who said, "It seems a way to say that we're not as reverent as other companies in town."

All right. Fair enough. And I imagine it would be interesting to see such a production, even if you don't happen to be deeply engaged in Star Trek. What would it be like to watch a Hamlet without knowing the language in which it's being performed? What elements of Klingon culture would be brought to bear in the production? How would those elements be made comprehensible to what I imagine was a majority non-Klingon audience. 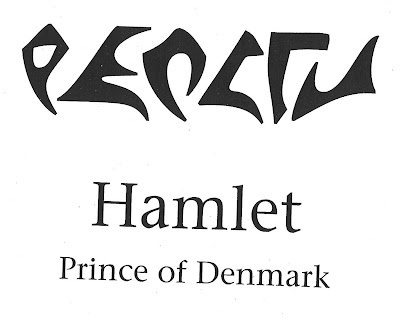 But I'd like to talk about the book for a minute. In addition to what I'd like to call "The Droes'hQuapleth Engraving" pictured above, the book has some magnificently funny material. As a parody of English Language Studies and Shakespeare studies, the footnotes are priceless.

Some of my favorites come from the nunnery scene:


nunnery: lit. squadron of the celebate. (The closest Klingon equivalent of a monastic order, these were bands of warriors—of either gender—who dedicated their lives to fighting, to the point of refusing to mate.)

to England: lit. To Earth. There is no documented instance where Terra paid tribute or ransom to the Klingon Empire; this is probably not a historical reference, although it has endeared the play to many young Klingons. (201)

But I also genuinely appreciate these notes from Hamlet's advice to the players:


I has as lief the town crier spoke my lines: lit. I would prefer my words to be shot from a Federation battleship.

It out-herods Herod: lit. He [who does so] is more deserving to resemble Molor than Molor himself. (201)

And, finally, this note on Hamlet's most famous soliloquy (from page 200—click on the image to enlarge it):

It's really quite remarkable stuff—even down to the parody of some conspiratorial elements—including some of the Nazi propaganda insisting that Shakespeare was actually a German author.
Links: Official Site of The Klingon Hamlet.


Click below to purchase Hamlet in the original Klingon
from amazon.com
(and to support Bardfilm as you do so).

Some of my favorites pertain to Hamlet's religious references; since the Klingons killed their gods ("They were more trouble than they were worth."), the authors clearly had to get creative.
...or, rather, the Federation revisionists clearly introduced these elements to disguise the work's Klingon origins.

I will go pray: lit. I'm off to do calisthenics.

he must build churches: lit. he must name planets

That's really very interesting! I had not noticed that. Thanks, loghaD!