Snyder, Zilpha Keatley. William's Midsummer Dreams. New York: Atheneum, 2011.
I spotted this novel at the local library recently; naturally, I snatched it up. Here are a few quick thoughts on it.

In a mix of narration and journal entries, it tells the story of William S. Hardison, a boy trying out for the role of Puck in a professional summer production of A Midsummer Night's Dream. He gets the role, to the chagrin of the other boy who was auditioning, and accidents start to happen. For example, someone smears the rope he swings on to make his big entrance with bacon fat, nearly causing him to fall. In addition, Hardison is trying to escape from a difficult family history.

The book is a sequel to William S. and the Great Escape, which I haven't yet read. It's not a bad novel, but it's fairly ordinary. And it does have one oddity that is pretty irksome. Whenever Shakespeare, A Midsummer Night's Dream, the middle initial of the protagonist, or any lines from the play are mentioned, they are put in a strange "Old English" font. This has the effect of making them stand out—and of alienating the reader. Here's a sample from the protagonist's audition (click on the image to enlarge it): 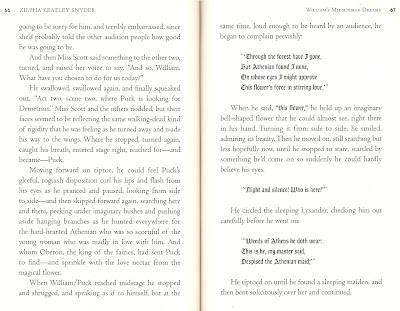 Instead of integrating Shakespeare into the text, this has the effect of separating it.

This could have been used to interesting effect, if (for example) the font changes to a more modern one as the protagonist becomes more and more comfortable with the language and starts to "own" it. But it sounds as though (from the excerpt on the pages) he was fine with the language from the beginning.

Thanks, Clara. You're right--it could have been an interesting device. However, it tends to say, "Hello! This is the Shakespeare part. Feel free to skip if it's too difficult."