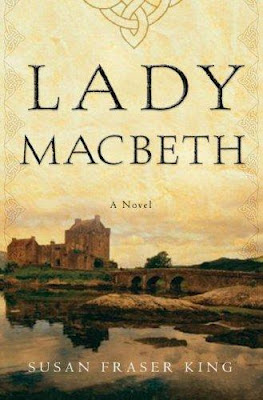 King, Susan Fraser. Lady Macbeth. New York: Crown Publishers, 2008 .
Since I seem to be mentioning the Shakespeare-related novels I've read or listened to over the past two years, I thought I'd continue in that vein.

King's novel is called Lady Macbeth primarily because a book called Gruadh or Lady Gruadh or even Lady Gruoch (the usual spelling) wouldn't have nearly the same selling power.

Lady Macbeth is a historical novel, well-researched and (mostly) historically consistent. It tells the story of Gruoch, the woman who married Mac Bethad mac Findláech. A quick overview over here will give you more details.

Of course, I was looking for the Shakespearean connection. Even in a novel that attempts to redeem Macbeth and Lady Macbeth, I would expect some connections to the particularities of Shakespeare's plot and his language. But this is really its own thing, telling the story of Gruadh from her point of view.

My expectations—rather than the quality of the book itself—were probably what made this book a bit disappointing. I did enjoy the alternate reading of Lady Macbeth's character that the development of Gruadh's character provides—particularly in terms of the romantic attachment between Macbeth and Lady Macbeth.

Heh - the castle on the cover is perhaps better known as the home of the Macleod clan at the start of the film "Highlander." And of course - are you going to tell me the author didn't notice? - it is shown as the clan is departing for battle with ... the Frasiers.