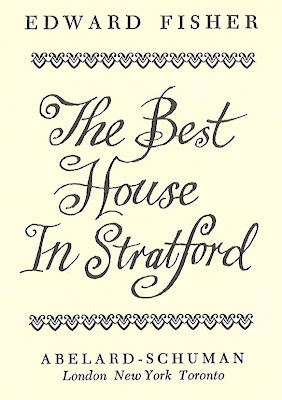 Fisher, Edward. The Best House in Stratford. London: Abelard-Schuman, 1965.
Editor's Note: In case you're wondering, I will be getting to some marvelous Shakespeare-related fiction. This is the build-up that will lead to the delightful payoff. Thank you.

Another of the Shakespeare-related novels I encountered that turned me away from Shakespeare-related novels was The Best House in Stratford, which I read some considerable time ago. Perhaps I was insufficiently tuned in to Shakespeare's biography at that point. Or perhaps it was because this volume is the third in a trilogy (the first two books are entitled Shakespeare & Son and Love's Labour's Won) and I only read the last book. In any case, the novel (to paraphrase Douglas Adams) more or less exactly failed to please. Here's a brief quotation by way of example:


A mangy dog, scavenging in a midden heap, began barking at him.

“What have I, Ben Jonson, descendant of Scottish lords and gentry, to do with such parcel-poets as these, who all write for sinners in the suburbs?”

I know it's unkind of me to think so, but I feel like heaving a clod at Ben Jonson at this point. And I imaging the mangy, midden-heap-scavenging dog feels roughly the same.