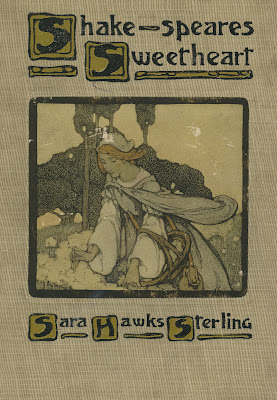 This 1905 novel gives us the story of Shakespeare's life in flashback from Anne Shakespeare's point of view. That, in itself, isn't a terrible idea—but the combination of extreme sentimentality, nostalgia, and pseudo-Jacobean language is too much.

To give it its due, it tells an interesting story—one with a strong Anne who follows Shakespeare to London for a time (although to tell you how would provide spoilers). And the illustrations are charmingly done.

But the language tends toward the tedious. By way of an example, here's the opening page (click on the image to enlarge it): 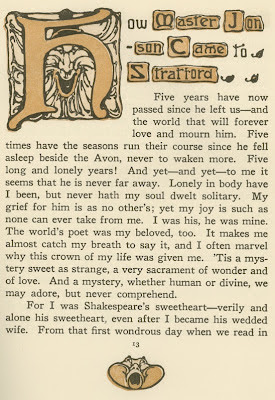 For I was Shakespeare's sweetheart—verily and alone his sweetheart, even after I became his wedded wife. From that first wondrous day when we read in each other's eyes the new-born love which was to live forever, to the time when he left me for a while, five years ago; nay, even until now, I am Shakespeare's sweetheart. And so it is my right, as it is also my pride and delight, to tell the story of our love for the great multitudes who held Will dear, for the shadowy, unborn multitudes who shall pay homage to his memory in years to come. Truly, the story is sacred to me; but he is not mine alone; he is also the world's, the world that loves him, that he loved. (13-14)

All in all, it's just a bit too much.