Book Note: William S. and the Great Escape: The book to which William's Midsummer Dreams is the Sequel 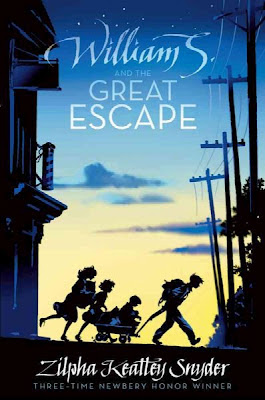 Snyder, Zilpha Keatley. William S. and the Great Escape. New York: Atheneum, 2009.
Reading the sequel before the first book may have given me a skewed view of both of them. But I requested the earlier young adult novel by Snyder dealing with William S. Hardison though an inter-library loan system and gave it a chance. Doing so gave me a greater appreciation for the sequel—though this volume is probably the more successful one of the two.

In William S. and the Great Escape, we get the story of how and why William S. and his three younger siblings ran away from his father and step-mother (and his step-siblings from his father's first marriage) to live with his dead mother's sister. One of the two main Shakespearean points of interest in the book is William's previous acting experience—he played Ariel in a school production of The Tempest but didn't tell any members of his family out of fear that they would make fun of him or beat him up. The other is his presentation of Shakespeare to his two youngest siblings—with the encouragement of his next youngest sister.

The image below (click on the image to enlarge it) is part of that scene. What interested me particularly is that it didn't take the "Everyone Always Loves Shakespeare All the Time, No Matter What Age" approach. Instead, the novel indicates that not everyone could get the youngest children interested in Shakespeare—but William S. could. In other words, it's not solely the material that grips its audience's attention; the presentation matters as well: 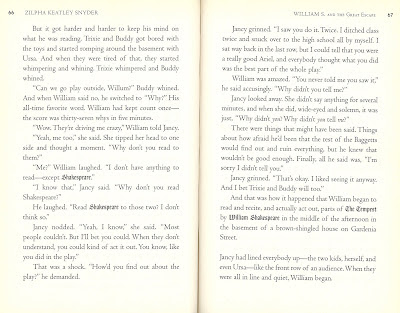 The thoughtfulness of the approach is a significant part of the presentation of Shakespeare—and I think that's an important point.

At first, I found the William's Midsummer Dreams (the sequel to this novel) fairly ordinary, but I think I have a better appreciation for it after having read William S. and the Great Escape.


Click below to purchase either or both of the books from amazon.com
(and to support Bardfilm as you do so).