Is this the Beginning of Simpsons Shakespeare? 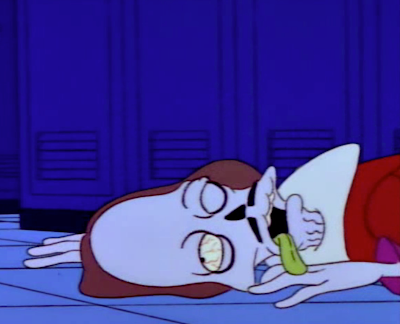 “Dial ‘Z’ for Zombies.” “Treehouse of Horror III.” By Sam Simon and Jon Vitti. Perf. Dan Castellaneta, Julie Kavner, Nancy Cartwright, Yeardley Smith, Harry Shearer, and Hank Azaria. Dir. Carlos Baeza. The Simpsons. Season 4, episode 5. Fox. 29 October 1992. DVD. Twentieth-Century Fox, 2008.
Yesterday's post reminded me that there were other connections between Shakespeare and The Simpsons. Although it's no longer available on Hulu, Sideshow Bob and Lisa had a marvelous exchange that centered on Macbeth. And I've heard (but I've never seen—isn't that shameful?) that a section titled "Do the Bard, Man" from "Tales from the Public Domain" (Season 13, Episode 14) tackles Hamlet!

The connection I'm posting today comes from the early days of the show. It's brief, but it's good. In this, the third Halloween special, Zombies invade the town. How Shakespeare's body got to Springfield is not explored in the episode itself, but I suspect that Mister Burnes purchased it on the black market as part of a phenomenal collection of Shakespeareana. In any case, Homer needs to vanquish Zombie Shakespeare, and he does so with the kind of clever line typical of horror films: "Show's over, Shakespeare." That line nicely calls attention to Shakespeare's role as dramatist rather than his role as literary icon. And Shakespeare's final line—a good rhetorical question—invites the audience to consider the possibility of a sequel!

Links: The Wikipedia article on the episode.