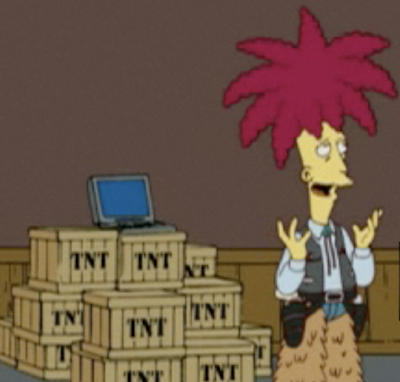 The clip itself is tremendously broad in its range of parody: it hits pedantic Shakespeareans, evil villains, Windows-based laptops, and Wikipedia, to name but a few:

Sideshow Bob: Let's not tarry. As Shakespeare said, "If it were done when 'tis done, then 'twere best it were done quickly." Power on! [Laughs maniacally.] This time I've made no mistakes.

Lisa: Actually, you made one. What Shakespeare really said was "'twere well it were done quickly."

Lisa: Macbeth: Act one, scene seven. Look it up.

Sideshow Bob [re-entering]: I shall! [Pause.] Come on, Wikipedia! Load, you unwieldy behemoth! [the laptop explodes] Oh, dear. Sideshow Bob: Hoist on his own petard.

Lisa: It's "hoist with his own petard."

Sideshow Bob: Oh, get a life.

The irony here is that Kelsey Grammer, the voice of Sideshow Bob, actually played Macbeth on Broadway in the 2000-2001 season--for ten days. It was first to open, and first to close. (Was the audience thinking, "That sinister voice ... now where have I heard that before? D'oh!")