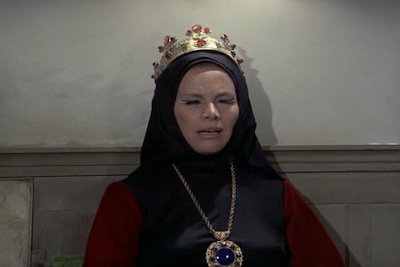 “Dagger of the Mind.” By Jackson Gillis. Perf. Peter Falk, Richard Basehart, John Williams, Honor Blackman, Bernard Fox, Arthur Malet, and Wilfrid Hyde-White. Dir. Richard Quine. Columbo. Season 2, episode 4. NBC. 26 November 1972. DVD. Universal, 2005.
Some time ago, a student mentioned an episode of Columbo that was heavily-indebted to Macbeth. I stored that knowledge away until I could track down the episode, investigate it, and contemplate its relation to Shakespeare. Only recently did I manage to do so.

I had never watched a Columbo episode before watching this one, and this is still the only episode I've ever watched, so I can't do any sort of  comparative analysis to other episodes. But the uses to which Macbeth is put in this play are genuinely intriguing.

The first of these is the meta-theatrical element. Since Columbo tends to present the crime first and then to display Columbo's cunning ability to figure out the complexities that the audience has already seen, this partial summary of the plot isn't exactly a spoiler—it's what you'd learn in the first five minutes of the show. Two actors, neither of whom is terribly morally upright, accidentally kill a third person. They don't plot or intend his death, but he does have secrets that would compromise them if they are connected to his demise. Consequently, they attempt to cover up the murder / accident. The meta-theatrical element comes in when we find out that the two of them are playing Macbeth and Lady Macbeth.

With the weight of an actual crime on their consciences, their acting becomes much more believable and much more powerful. And the speeches they deliver take on a new layer of meaning.

Other connections between the play and their actions underline the mirror plot. Lady Macbeth's "How easy is it, then?" on stage is exactly the attitude she takes toward the off-stage cover-up. In the clip below, you'll see that the on-stage knocking that signals the porter's entrance segues neatly into the off-stage knocking of the maintenance man who is trying to fix the radiator in the Macbeths' dressing room. And when he makes a move to move the trunk, Lady Macbeth sits on it to prevent him from discovering the body—he might otherwise be tempted to shout "Confusion now hath made his masterpiece!" At the end of this clip, the theatre lights are shut off: "Out, out, brief spotlight" is the echo we hear.

All in all, it's an intriguing use of the psychology of Macbeth.
Links: The Episode at IMDB.

Click below to purchase all the Columbo there is from amazon.com
(and to support Bardfilm as you do so).

Loved this post I found, as they are airing 'Dagger of the Mind' this morning. Thought you might also be interested in other Columbo/Shakespeare episodes 'Uneasy Lies The Crown' and 'Strange Bedfellows'. Also, don't know if you caught this, but the production of Macbeth in 'Dagger of the Mind' bares uncanny resemblance to Orson Welles' 1947 STAGE production of Macbeth (NOT his 1948 film): http://www.hollowaypages.com/welles.htm

Thanks, Humphrey! Welcome back.